Toronto police gave Mayor Rob Ford a chance to watch the infamous video of himself with a crack pipe but his lawyer told investigators the meeting would not happen.

Court documents released Wednesday show investigators had reached out to Ford’s attorney Dennis Morris between Oct. 28 and Nov. 7, 2013, asking for a meeting with the mayor.

During that time, Morris was told that Ford could watch the video with two conditions imposed to protect the right to a fair trial for Alexander "Sandro" Lisi, the mayor’s friend who has been charged with extortion for his alleged efforts to retrieve the video from suspected gang members.

Under those conditions, the mayor would not be allowed to discuss or comment on the video.

On Oct. 31, Toronto Police Chief Bill Blair told reporters police were in possession of a video that was consistent with the crack video that had been described in the media. On Nov. 5, the mayor surprised the media by admitting he had in fact smoked crack cocaine.

In the days that followed, Ford repeatedly asked police, through interviews with the media, to release the video to the public, never mentioning that investigators had offered to show it to him in private.

Morris dismissed the offer from investigators, calling it "nonsense."

"We want the world to see the video," he told CP24 Wednesday afternoon. "The offer was that we could see the video but we couldn't comment upon the video to anyone and that's complete nonsense. We thought with those conditions it was inappropriate."

"If the mayor saw the video and the media said tell us about the video, he wouldn't have been able to say a word," he continued.

The court documents, which detail Project Brazen 2 – a police investigation into the mayor and Lisi – also describe the video in detail.

Up until now, the video had only been described by reporters with the Toronto Star and Gawker.

The documents verify much of the reporters’ accounts and, furthermore, confirms the date the video was taken.

The documents say the mayor and Lisi have refused to give statements to investigators.

The documents say the video appears to have been filmed covertly and it shows Ford smoking what appears to be a narcotic inside a residence on Feb. 17, 2013 at 7:57 p.m. City hall was closed the next day for Family Day.

The documents go on to describe Ford's actions as he holds what appears to be a glass cylinder in one hand and a lighter in his other hand while speaking to people in the room.

Ford soon appears to question whether he is being filmed.

"At the end of the video, Mayor Ford's attention is drawn towards an illuminated electronic device (looks like a cellphone) which briefly passes in front of the recording device," the documents say. "He then drops the glass cylinder and lighter on a table next to him; he briefly points at the camera and asks if it's on."

The documents do not identify the substance contained in the glass cylinder, a fact that Morris was quick to point out.

"No one could say what's in the pipe," Morris told The Canadian Press earlier Wednesday, calling the police investigation into the mayor a "continued waste" of taxpayer money.

The documents also do not make mention of the mayor making any homophobic or racist comments -- comments that were detailed in accounts from a reporter with Gawker and two reporters with the Star.

The mayor has admitted to smoking crack cocaine while in office but he has not given reporters any details about the experience.

He denied the existence of a video in previous comments to reporters. However, wiretaps that were previously released suggested he may have attempted to purchase the video.

Ford, who is running for re-election this October, has not been charged with a crime. He declined to comment to reporters outside city hall Wednesday afternoon.

Police believe Ford was in the room with Elena Basso, a resident of the Windsor Road home where the video is believed to have been filmed, and alleged gang members Liban Siyad and Mohamed Siad, who is believed to have filmed the mayor and tried to sell the recording to the media as early as February 2013.

An Ontario Superior Court judge allowed the documents to be partially unsealed Wednesday when lawyers for media outlets, including CP24 and CTV News, attended a hearing to seek their release.

The "information to obtain" (ITO) contains sworn evidence gathered by police and it was used to obtain production orders for the cellphone records of Ford, Lisi and others.

None of the allegations in the ITO has been tested or proven in court.

Part of the documents are blacked out but media lawyers are returning to court March 28 to argue for that information to be made public.

Media lawyer Peter Jacobsen said lawyers will also argue for the release of a new ITO from March 7.

According to the documents released Wednesday, police obtained five digital video files that were downloaded onto Siad's laptop last April 25, including the clip that shows Ford smoking the substance.

Three are failed attempts to film Ford and another shows a man sitting alone in a vehicle as he explains the contents of the longer video. Police say that man appears to be Siad.

In that 25-second video, the man explains how the mayor was recorded about 20 minutes earlier.

"Siad advises that to record anyone secretly you should aim the camera towards that person and they won't know what you're doing as your (sic) just playing with your phone," a police officer wrote. "He then advises that's how you would catch a person slipping. He then goes on to say 'or even catch a mayor smoking crack.'"

There was a sixth video file but police say in the documents that it is missing.

Project Brazen 2 began last May after the website Gawker and the Star broke the news about a cellphone video that allegedly shows Ford smoking crack cocaine. Reporters said they were approached by someone trying to sell the video for six figures. The media outlets never bought the video.

In early October, Lisi was charged with drug offences after police conducted surveillance on him and Ford for several weeks.

Later that month, police charged Lisi with extortion over an alleged attempt to retrieve Ford's missing cellphone in April 2013 and the video in May 2013, the documents say.

Lisi's charges remain before the courts and he is innocent until proven guilty.

The documents also detail an interview police conducted last Nov. 4 with Fabio Basso, Ford’s long-time friend, the brother of Elena Basso and a resident of the Windsor Road bungalow.

Basso denied seeing Ford smoke crack and he told police he has seen the mayor intoxicated, sometimes at parties, and he knows Ford to be a “drinker.”

Basso said the mayor sometimes shows up at his house without notice and Ford once visited him while he was drunk.

Basso’s brother, Enzo, has worked for Deco Labels and Tags, the Ford family business, for about eight to 10 years, the document says.

Basso also spoke to police about a violent home invasion that occurred last May 21, less than a week after reports about the Ford video first surfaced.

In that incident, a man armed with an extendable baton shoved Basso’s mother, Lina, aside at the front door and forced his way into the home, where he repeatedly struck Basso and his girlfriend, Sheryl Frederickson, over the head and body as they were lying in bed in his bedroom

Basso told police he has never seen the man before.

No one has been arrested in connection with that incident.

The documents also show a conversation between Elena Basso and police.

During that interview,  Basso refused to discuss the mayor. When she was shown photographs of three men believed to have been involved in the recording and attempted sale of the video, Basso said she couldn’t identify them.

Other documents related to Project Brazen 2 were previously released in batches in the weeks following Lisi’s initial arrest.

Those documents detailed occasions where Lisi and Ford exchanged packages or met at a gas station, school parking lot and secluded park.

The documents, used to obtain search warrants, also revealed damaging allegations made by some of the mayor’s staffers.

During interviews with police, current or former employees discussed allegations about drug and alcohol use, impaired driving, associations with suspected prostitutes, and inappropriate comments the mayor made to a former female staffer.

None of those allegations has been proven in court.

Meanwhile, the investigation into Ford and Lisi continues.

Earlier this month, Chief Bill Blair announced oversight of the Project Brazen 2 investigation has been handed over to Ontario Provincial Police. He made the move in response to calls for the investigation to be handled by an outside police agency.

Ford claims the investigation is politically motivated and he has called the aerial and ground surveillance measures a waste of taxpayers’ money. He and his brother, Coun. Doug Ford, have both verbally attacked the police chief.

Last month, the mayor dared the police chief to arrest him. 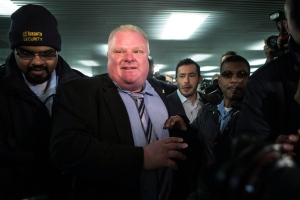 Some notable moments in the Rob Ford video controversies. 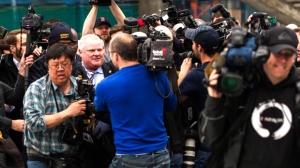 Toronto Mayor Rob Ford leans on a desk outside his office at city hall in Toronto on Wednesday, March 19, 2014. THE CANADIAN PRESS/Chris Young 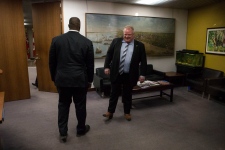 Toronto Mayor Rob Ford, right, steps out of his office after speaking to a group of students Wednesday, March 19, 2014. (The Canadian Press/Chris Young)