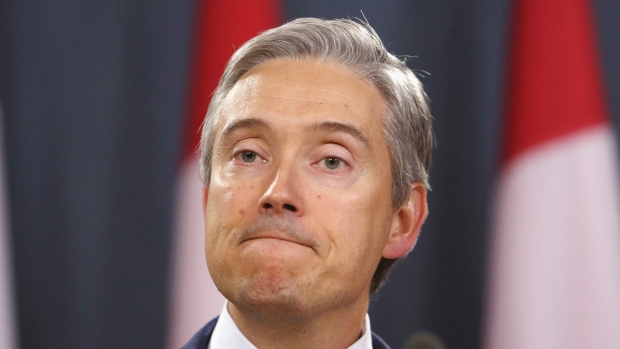 LONDON -- Foreign ministers from Canada and other countries who lost citizens in the shooting down of a Ukrainian airliner are discussing the tools they might need to use to force Iran to co-operate with them if that becomes necessary.

Those potential levers include legal action in European courts and possible resolutions against Iran at the United Nations Security Council, said a senior Canadian government official, speaking on the condition of anonymity because of the sensitivity of the situation.

Foreign Affairs Minister Francois-Philippe Champagne is hosting the closed-door talks, now underway in London, with his counterparts from four other countries that lost citizens in the crash - Ukraine, Sweden, Afghanistan and Britain.

Iran is leading the investigation into the crash of Ukraine International Airlines flight PS752 because of international aviation rules. The general assessment of the countries going into today's meeting has been that Iran's level of co-operation has been generally good, “but we have to monitor every step of the way,” said the official.

The ministers are discussing the possible tools “to force a conversation” around compensation, ensure full accountability and maintain access on the ground in Iran should that become necessary, the official said.

The group hopes to emerge with a united position on moving forward with Iran, which has sent mixed signals about the investigation that it is leading.

The symbolism of that intent was unmistakable as the gathering at Canada House on London's Trafalgar Square opened with a solemn, wordless ceremony.

Champagne led the four ministers down a grand staircase, past flags from their countries to a podium where each lit one candle in quiet succession. The ministers then stood shoulder to shoulder behind the flickering flames to lead a moment of silence.

The federal government hopes the formation of this group of countries affected by the crash will ensure justice and financial compensation for the families. All 176 people aboard were killed last week when one, though perhaps two, Iranian surface-to-air missiles hit the Ukrainian airliner.

On Wednesday, Prime Minister Justin Trudeau's parliamentary secretary, Omar Alghabra, said the federal government was exploring options for compensating victims' families in the interim because the international process could drag on for years.

The closed-door meeting in London was to begin with a political update about the situation in Iran and the tensions in the region that led up to the crash, said the official.

That was to be followed by an intelligence briefing from Ukrainian Foreign Affairs Minister Vadym Prystaiko as his country has had investigators in Iran for a week, the official said.

The official said the bulk of the agenda would focus on the following issues:

- supporting families of the victims

- ensuring the victim-identification process measures up to international standards

- a discussion of the actual crash investigation

Dutch Foreign Minister Stef Blok is joining the talks to provide a lessons-learned briefing based on the experience of the Netherlands in leading its five-year-long probe of the deadly shootdown of Malaysia Airlines flight MH17 over Ukraine, which investigators have blamed on Russia.

Iran is leading the investigation because the crash occurred on its soil, but there are precedents for handing that responsibility over to another country that suffered losses. Iran lost 82 nationals in the crash, while 57 Canadians were killed.

The Canadian Press has independently confirmed at least 89 victims with ties to Canada, many of them students and professors returning after spending the December break visiting relatives in Iran.

Trudeau has been working the phones with his international counterparts in recent days, including with United Nations Secretary General Antonio Guterres and the leaders of Afghanistan, the United Arab Emirates and Jordan.

“The Prime Minister and the Secretary General reaffirmed the need for a complete and thorough international investigation. They welcomed the involvement of the International Civil Aviation Organization (ICAO) in the investigation,” said a readout of Trudeau's call with Guterres. ICAO is based in Montreal.