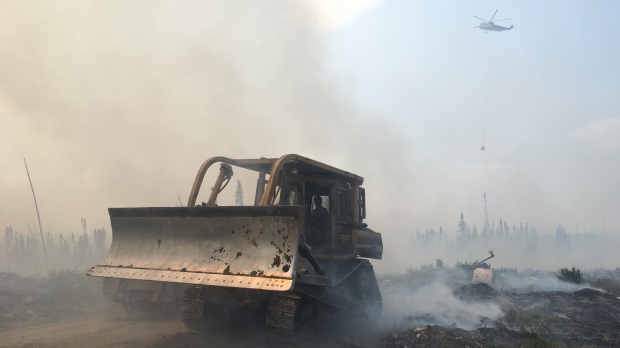 A bulldozer clears debris as crews battle a forest fire near Pikangikum First Nation, Ont. in this undated handout photo. THE CANADIAN PRESS/HO, Ontario Ministry of Natural Resources and Forestry

Residents of a First Nation threatened by a growing forest fire in northwestern Ontario began arriving in Regina on Thursday after the Saskatchewan government offered to host the evacuees.

Members of Pikangikum First Nation have been leaving their homes via air, land and water routes since a full evacuation was ordered on Monday, but bus and boat departures were paused Wednesday because of a lack of places to send evacuees.

Saskatchewan then offered to take up to 2,000 displaced residents, with the first flight of evacuees from Pikangikum landing in Regina on Thursday morning.

“We have eight flights scheduled today,” said Duane McKay, vice president of operations for Saskatchewan Public Safety Agency. “We're treating this as a full-blown operation ... This is an emergency situation in Ontario.”

McKay said each flight had about 50 to 80 people on it.

Deanna Valentine, provincial co-ordinator for emergency social services with the Saskatchewan Ministry of Social Services, said 500 evacuees will be taken to the dorms at the University of Regina and about 150 hotel rooms have been booked to accommodate others.

“We are expecting 400 people will be arriving in Regina today,” she said during a conference call Thursday, adding that arrangements are also being made to shelter people in Saskatoon and Prince Albert once the accommodations in Regina are filled.

Meanwhile, the Canadian Armed Forces, which has been flying residents out of Pikangikum all week, said about 1,350 of the community's 3,800 residents had been airlifted out as of Thursday morning, with more flights scheduled for later in the day.

“There's been so much pressure on the leadership of Pikangikum, on some of the frontline workers who have been at this for many days now, to be able to tell the evacuees where they're going to be going,” Fiddler said.

“There's still challenges as far as I know, about host community access when we put people on buses,” he said. “We want to minimize having people sit on buses for 10 or 12 hours.”

Brent Ross, a spokesman for Ontario's solicitor general, said evacuees who weren't flying to Saskatchewan are being housed in the northern Ontario communities of Lac Seul First Nation, Sioux Lookout, Kapuskasing, Smooth Rock Falls, Thunder Bay and Hearst - most of which were reaching capacity.

The Ministry of Natural Resources said Thursday that the fire - dubbed Red Lake Fire 39 - has now grown to more than 507 square kilometres in size, which is larger than Quebec City.

The blaze was burning six kilometres southwest of Pikangikum, on the opposite side of a lake. Crews were setting up hose lines on the east and northwest sides of the fire, and sprinklers have been installed southwest of the community, the ministry said.

Spokeswoman Jolanta Kowalski said there are 84 firefighters now working on the fire, but that number was expected to rise.

“With large fires like Red Lake 39, even a small amount of growth along the perimeter will have a significant impact on size,” she said.

Meanwhile, Red Lake Fire 23, a forest fire raging eight kilometres south of the community of Keewaywin, has grown to 926 square kilometres - nearly twice the size of the fire threatening Pikangikum.

Keewaywin First nation completed a full evacuation of its roughly 450 residents last week and were relocated to Sioux Lookout and Timmins.

- with files from Colette Derworiz.