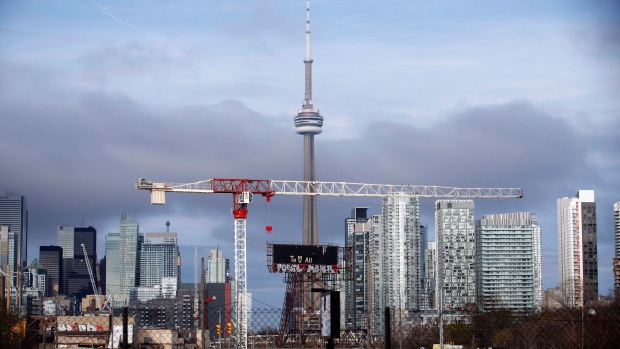 Condominiums and the CN Tower are shown along the Toronto skyline on Tuesday, April 25, 2017. THE CANADIAN PRESS/Cole Burston

TORONTO - A new report says there's a rare window of opportunity to snag a rental condo in downtown Toronto as units that were listed on Airbnb prior to the COVID-19 outbreak are moving to the long-term rental market.

“If you are a renter looking to move to the downtown area, now is the best time to take the leap if you can,” Zoocasa agent Andrew Kim said in a statement on Thursday, citing “prices below market value and landlords willing to make compromises.”

Agents from real estate brokerage Zoocasa said on Thursday that higher vacancies, paired with a slow summer for tourism, could mean that condos once used as short-term rentals may become long-term homes for opportunistic buyers or tenants.

Zoocasa says there were 83 per cent more Toronto condo apartments listed for rent in June of this year, compared with June 2019. But rental listings were 257 per cent higher over that same period for 10 buildings in the downtown entertainment district and waterfront, a popular area for Airbnb visitors.

The report, based on analysis of the Toronto Regional Real Estate board's July 21 data, also found a spike in sale listings for Toronto condos buildings that “allow, previously allowed or are known to be popular on Airbnb.”

Nathan Rotman, who does public policy for Airbnb, pushed back on the notion that there were more Airbnb units being put up for sale or rent. Speaking at the Move Smartly Toronto Real Estate Summit on Thursday, Rotman said that even amid COVID-19, said Airbnb listings are up this summer compared to January of this year.

“Obviously, tourism has taken a significant hit at the height of the pandemic,” said Rotman.

The Zoocasa report did not delve into price changes, and it only looks at a small slice of the market. Out of 6,845 condo rentals listed for rent across the city, Zoocasa's sample of Airbnb-friendly condos was focused on just 350 units listed in June, up from 98 listed for sale in the year-ago period.

The report also suggested several possibilities explaining the vacant units, aside from former Airbnb site, including the departure of students, remote workers and laid-off renters who broke leases during the early days of the COVID-19 pandemic and lockdown. And while the market may be easing, it's easing from a very tight position, Zoocasa noted. Vacancy rates under three per cent are considered unhealthy, and Toronto has been hovering near one per cent.

While Zoocasa's report focuses on a few prime blocks in downtown Toronto, Airbnb's recent bookings in Canada are mostly rural, Rotman said at the summit, which was not related to Zoocasa's report, but addressed similar issues. Toronto is also in the midst of implementing new rules that Airbnb listings must be the lister's primary residence.

“There's a total change in the supply-demand dynamics in the city at the moment. There are less people moving into the city. Toronto has been on a growth trajectory like crazy, and the reality is, that has slowed down to basically a standstill during the pandemic,” said Rotman. “There are various different factors leading to the rental housing market today in the city.”

Vivien Wong of Realosophy Realty said the short-term rental market will be challenging moving forward, especially in Toronto, which may be sparking the conversation about converting short-term Airbnb rentals into long-term rentals - or simply offloading the property. Wong noted during the summit that if landlords do decide to convert a short-term rental property to house long-term tenants, it can make the property harder to sell in the future, since there are rules about tenanted properties.

“I do think, because the short-term rentals are a little bit more challenging right now, perhaps it could be a smarter decision to go to the long-term side,” said Wong.

This report by The Canadian Press was first published July 23, 2020.