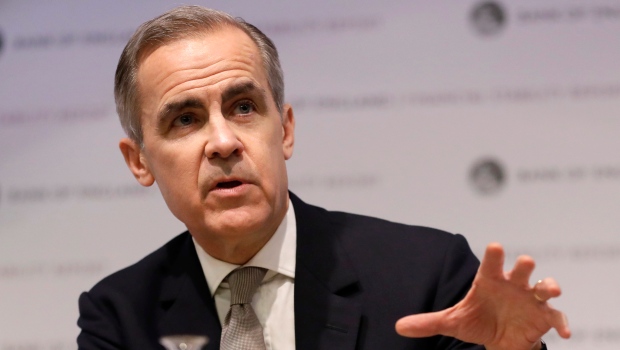 But the former governor of the Bank of Canada and the Bank of England left Liberals guessing whether he'll actually run for the governing party in the next election.

“To me, humility means recognizing the great good fortune that I've had growing up and the responsibility of service that comes with that,” Carney told Liberals at their virtual convention.

“And that's why I'll do whatever I can to support the Liberal party in our efforts to build a better future for Canadians.”

He did not say whether that means running as a Liberal candidate. Rookie Toronto MP and convention co-chair Marci Ien, who posed questions to Carney after his speech, didn't ask. There was no opportunity for journalists to pose questions after the event.

However, the live chat forum on the convention website was instantly flooded with Liberals, who've long dreamed of Carney as a potential leader one day, urging him to take the next step.

But a few voiced skepticism, including one Liberal who asked: “Anyone else getting Ignatieff vibes from this guy?” - a reference to Michael Ignatieff, a world-renowned academic and intellectual, who led the Liberals to their worst defeat in history in 2011.

Earlier Friday, Prime Minister Justin Trudeau dodged questions about Carney's political future, twice refusing to say whether he has encouraged the former central banker to run. He characterized Carney's convention debut as simply a matter of Liberals tapping his expertise on economic policy and on climate change.

“The Liberal party has a long history of welcoming in expert speakers at our conventions from a range of different backgrounds,” Trudeau told a news conference on the COVID-19 pandemic.

“We're very pleased to have someone of the stature of Mark Carney who has been working very, very hard on, among other things, the intersection between the global economy and the fight against climate change.”

Carney is currently the United Nations special envoy on climate action and finance.

Trudeau said Carney's star turn at the convention is another example of how Liberals are listening to “the best and the brightest from around the world” on how to navigate the COVID-19 pandemic and “build back better” the ravaged economy.

Political rivals didn't wait for Carney's speech, much less an answer to the will-he-run question, before trashing him as a wealthy, out-of-touch elitist.

“While Liberals continue to court the approval of the ultra-rich and well connected, New Democrats will continue to fight for working people,” the NDP said in a statement.

“After getting chased out of the United Kingdom for billing more than $500,000 in travel expenses for 52 trips to exotic places, often on fossil-fuel-powered jets, Carney will preach to Canadians about the need for higher energy prices,” predicted Conservative MP Pierre Poilievre in a statement released shortly before Carney's speech.

“He will also promote trendy new economic experiments that are popular with Davos billionaires.”

While he was still Bank of Canada governor in 2012, Carney quietly flirted with the idea of a leadership run, courted by Liberals desperately searching for a new saviour after Ignatieff's flame-out.

But amid criticism that even the smallest whiff of partisanship was undermining the independence crucial to a central banker, Carney eventually squelched the speculation by saying he'd just as soon become a “circus clown” and then left Canada to take over the helm of the Bank of England.

He has been coy about his political ambitions since returning to Canada last summer and releasing a book last month promoting his vision for a new kind of capitalism that combines the pursuit of profit with social purpose.

He reiterated Friday his view that the COVID-19 pandemic offers an opportunity to reset the way the world works, making it more inclusive, more equitable and more environmentally sustainable - a view that dovetails neatly with the thinking of Trudeau's government.

His convention appearance came little more than a week before Finance Minister Chrystia Freeland, herself seen as a potential successor to Trudeau, is to deliver her first budget.

It is expected to lay out in detail the cost of the pandemic, which has already sent the national deficit soaring past $380 billion, along with a plan to spend up to $100 billion more to fuel a more equitable, green, inclusive economic recovery.