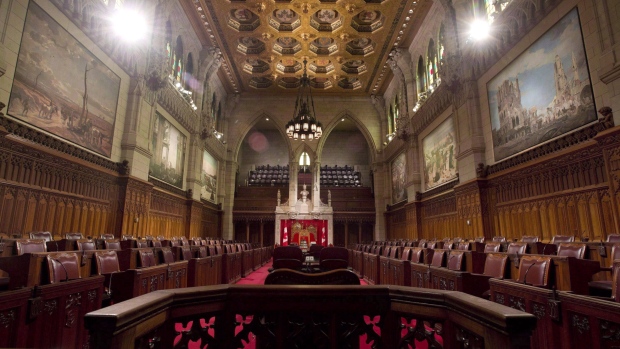 The Senate chamber sits empty on September 12, 2014 in Ottawa. THE CANADIAN PRESS/Adrian Wyld

OTTAWA - Three new senators have been named to the upper chamber on the advice of Prime Minister Justin Trudeau, including a high-profile labour leader and a political trailblazer who is also a former Liberal candidate.

Hassan Yussuff, who just stepped down from a seven-year term at the helm of the Canadian Labour Congress, will fill a seat in Ontario after a year in which he was in the spotlight advocating for emergency aid to workers.

Also being appointed today is Jim Quinn, chief executive of the Saint John Port Authority, having steered the organization through the pandemic as ship traffic and revenues dropped. Quinn will fill a seat in New Brunswick.

Another longtime New Brunswick politician, Conservative Sen. Percy Mockler, wrote on Twitter that he was certain Quinn's experience will be beneficial for the province and country.

A second seat in Ontario will be filled by Bernadette Clement, the current mayor of Cornwall, Ont., and the first Black woman to hold a mayoralty in the province.

She is also a former federal Liberal candidate, having run unsuccessfully in the 2011 and 2015 elections in the riding of Stormont-Dundas-South Glengarry.

In a Facebook post penned to the residents of her city, she announced the appointment and her immediate resignation from the position of mayor that she has held since being elected in 2018.

“I had hoped to remain mayor for the remainder of my term, or maybe more, if you were willing to have me,” she wrote.

“But we don't control timing, only the readiness and openness to new opportunities. So while this magnificent story is unfinished, I have been asked to take on a different role which will continue to involve me in helping to add further chapters to our shared history.”

The Prime Minister's Office said all will all sit as Independent senators.

In a statement, Trudeau said he looks forward to working with the three new senators who have dedicated their careers to public service.

Instead of political appointments made directly through the prime minister - a process scorned for filling the chamber with partisan hacks, flacks and bagmen - the Liberals have turned to an arm's length advisory board that vets applicants and recommends short lists of potential Senate nominees from which Trudeau fills vacancies in the upper house.

The Liberals say it creates an independent, merit-based selection process, which to date has led to Trudeau making 55 appointments since becoming prime minister, including the three on Tuesday.

Yussuff's appointment drew mixed reactions from within the labour movement.

Some believed he would be a strong voice for workers in the Senate. Tom Reid, international vice-president for Canada of the International Brotherhood of Electrical Workers, said in a statement that Yussuff's appointment showed “labour is a top priority in building back better” from COVID-19 as Trudeau has repeatedly spoken about.

Others decried it as the result of what they believed was a too-cozy relationship Yussuff had with the Liberals, including his support to former finance minister Bill Morneau's bid, later abandoned, to head the Organization for Economic Co-operation and Development.

“Not surprised at Hassan Yussuff being sent to the crony club of the Liberal Senate. The guy used his position as leader of the labour movement to be a cheerleader for Bill Morneau - Canada's privatized pension king,” tweeted New Democrat Charlie Angus.

“Kinda says it all. He will be very comfortable in the Senate.”

Two senators are set to hit the mandatory retirement age of 75 this summer - Ontario's Jim Munson and New Brunswick's Carolyn Stewart Olsen - with four more seats to come open by this time next year.