TORONTO - Bill Davis, the 18th premier of Ontario and one of the country's longest-serving premiers, has died at 92.

A statement from his family says Davis was surrounded by his relatives when he died of natural causes in Brampton, Ont., Sunday morning.

The pipe-chomping Tory titan, often called Ontario's “education premier,” held the position from 1971 to 1985, taking over from the late John Robarts.

His stretch in power, which culminated in him stepping down at the height of his popularity, effectively ended his party's unprecedented, 42-year rule of the province.

He was a key player in Pierre Trudeau's crusade to patriate the Constitution, which later came back to haunt Davis when he was touted to lead the federal Conservatives. 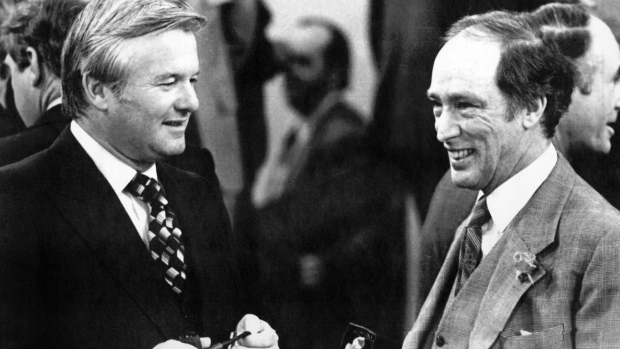 “He was a skilled statesman who set aside partisanship and worked with my father, Pierre Elliott Trudeau, to bring forward concrete change and uphold our shared values, like diversity and human rights, through the creation of the Charter,” Trudeau said in a statement.

Toronto Mayor John Tory, for whom Davis was a mentor, said with his death “Ontario and Canada have lost a giant.”

“He leaves a legacy like few others, a legacy that will go on building a stronger, fairer and more prosperous Canada for decades to come, a legacy which will help people build better lives,” Tory added.

Premier Doug Ford said Davis served Ontario “with honour and distinction” and flags across the province will lowered to half-mast in his honour.

“While his accomplishments as Premier are too many to list, he will be remembered most for the kindness and decency with which he carried himself every day,” Ford said in a statement.

My deepest condolences to the family of @WilliamGDavisPC, Ontario’s 18th premier. He served the people of Ontario with dignity and class. We will be lowering flags to half-mast across the province in his honour.

“He was very decent, he was very calm, he was very much a gentleman,” Chretien said in an interview. “He was representing the best values of Canada.”

“He was a source of advice and counsel to me always, and I valued it greatly, especially in my early days as leader and then in our Constitutional battles,” Mulroney said. “Bill Davis was an entirely admirable human being, a man of great integrity and judgement.”

Davis's family says a private funeral will be planned followed by a public celebration to be announced at a later date.

McMurtry, who was three years younger than Davis, recalled that the future premier was not to be underestimated - either on the field or in the political arena - despite his “very laid-back personality in the minds of many people.”

“I realized at that early stage that he was a highly competitive person,” McMurtry said in a 2008 interview.

His political career began when the lawyer was hand-picked by cabinet minister and interim premier Thomas Kennedy to run in his riding of Peel, winning the seat in 1959. He nearly lost the election, due to former prime minister John Diefenbaker's decision to cancel the Avro Arrow, putting 14,000 employees - most of whom lived in the riding - out of work.

Davis's ascent to power seemed to be written in the stars. At age 33, he landed in cabinet as Ontario's new education minister - one of the most important jobs in government.

That same year, his young wife Helen died of cancer after a long illness, leaving behind their four children. He married his second wife Kathleen a year later and together, they had a daughter, Meg. 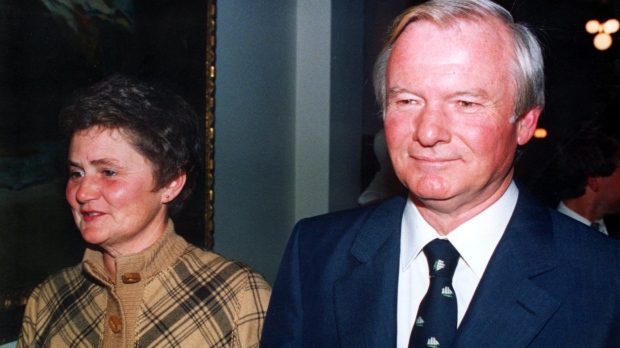 Davis's career took off during his nine years in education - a time of massive change in Ontario schools - and he is credited with creating the province's Community College System.

In those days, Ontario's population was booming and education was a top-spending ministry, consuming about 40 per cent of the provincial budget.

He also cultivated a following as he criss-crossed the province to open new schools, which served him well when he launched his leadership drive after then-premier John Robarts quit in 1970.

It was tough contest, but Davis managed to beat rival Allan Lawrence by a mere 44 votes. He was sworn in as premier on March 1, 1971.

Rarely seen without his pipe or Beatles boots, Davis earned a reputation for being cautious and playing his cards close to the chest. He delayed decisions until the last possible moment, often frustrating journalists with rambling replies to their prying questions.

Even in his 80s, decades after he'd left the political spotlight, Davis couldn't help toying with reporters. When he tired of their questions, he'd suggest his own - then refuse to answer.

His detractors called him wishy-washy, a leader without vision, a man whose propensity for procrastination was almost pathological. But “Brampton Bill” kept winning.

Brampton Mayor Patrick Brown tweeted Sunday that Davis was his city's “most beloved resident ... Ontario's most successful premier and the definition of decency.”

He was our most beloved resident in #Brampton, Ontario’s most successful Premier and the definition of decency.

His legacy is one of profound accomplishment & he will be missed greatly.

Asked to explain his electoral success despite his dull image, Davis summed it up in two words: “Bland works.”

Aides said he loved the disguise. Beneath that facade was a tough and savvy politician who always found a way to grab the middle ground and push everyone else off to the sidelines - a strategy adopted by former Liberal premier Dalton McGuinty.

Clare Wescott, a longtime aide, once described Davis as a “decisive and tough son-of-a-bitch disguised as a pussycat.”

Even as Britain and the United States were shifting to the ideological right with Margaret Thatcher and Ronald Reagan, Davis steadfastly steered his party towards the centre.

He was labelled a Red Tory, but insiders say his pragmatic approach to governing and willingness to adapt and give people what they wanted was the real secret of his success. 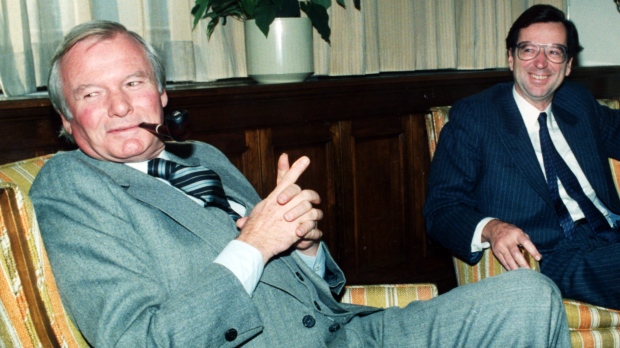 “All others within our political spectrum have moved jaggedly from the right to the left, and others still have become trapped in their own ideology,” Davis said in a 1981 interview.

“Our party has sustained a flexible approach to the pragmatic problems and opportunities of government.”

His government stopped the Spadina Expressway through Toronto, limited rent increases, lowered the drinking age to 18 from 21, curbed wage hikes for broader public servants and, during the economic downturn of the early 1980s, launched a massive infrastructure program.

His policy choices sometimes created deep divisions within the party. There was bitter opposition among right-leaning Tories when Davis decided in 1981 to pour $650 million into buying a 25 per cent stake in U.S. oil company Suncor Inc.

Davis's keen instincts also served him well in what some consider his finest achievement: the 1981 constitutional accord.

Backing Pierre Trudeau in the face of initial opposition from most premiers, Davis used his backroom skills to convert many of his disgruntled counterparts. According to Roy Romanow, Davis's ultimatum to Trudeau that he'd pull Ontario's support unless Trudeau accepted the notwithstanding clause - a key concession to the provinces - was key in convincing the prime minister to accept the compromise.

Davis refused to call it an ultimatum, but a “point of view” and a “fact.” But the tenor of the meeting changed the next morning, he acknowledged.

Davis said he also played a role in putting the wheels in motion for the final first ministers' conference.

Trudeau was thinking of moving unilaterally and going to Westminster himself, Davis said. He met with him and urged Trudeau not to go.

“I said to the prime minister, 'Prime Minister, you have to try once more.' He kept saying it won't happen. I said, 'I can't guarantee that we'll go with you. I don't know what Richard (Hatfield, then-premier of New Brunswick) will do,”' he said.

“But I take some credit for, in fact, having that final conference. And it worked.”

But Davis's support for another Pierre Trudeau-era proposal - the National Energy Program - angered his federal and western counterparts, and likely prevented him from seeking the federal Tory crown in 1983.

He may have been a staunch federalist, but Davis was no slave to Ottawa. He refused to heed both Trudeau's and Brian Mulroney's calls for Ontario to become officially bilingual, opting instead to extend French services gradually.

Davis retired from politics in 1985 and returned to law. But he never really gave it up. He continued to be involved in provincial and federal elections and offered sage advice to his successors, including McGuinty, NDP premier Bob Rae and Tory. 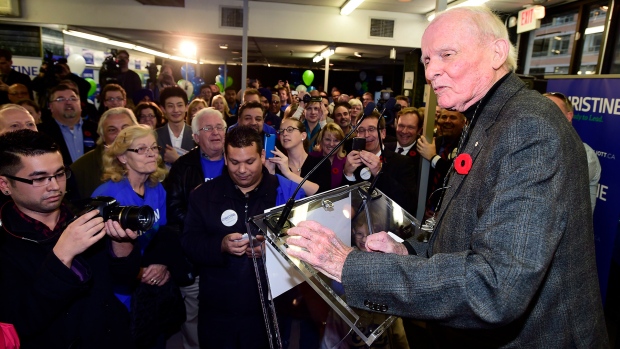 Rae tweeted Sunday that Davis was “an honourable opponent, a wise mentor and a great friend ... Ontario and Canada had no finer public servant.”

@aprae and I were deeply saddened to learn this morning of Bill Davis’s death. He was a an honourable opponent, a wise mentor, and a great friend. To Kathleen and his wonderful family we send our deepest and heartfelt condolences. Ontario and Canada had no finer public servant. pic.twitter.com/ZsdyRNbiFk

But despite his many accomplishments, Davis was modest - and cheeky - until the very end.

In his 2009 interview with TVO, Davis said he wasn't concerned with how he would be remembered.

“Historians will do what they want to do,” he said.

“But I am comfortable that I did my best, I made the judgments that I thought were right. And on occasion, I may have made a mistake. I can't think of any.”

This report by The Canadian Press was first published Aug. 8, 2021.