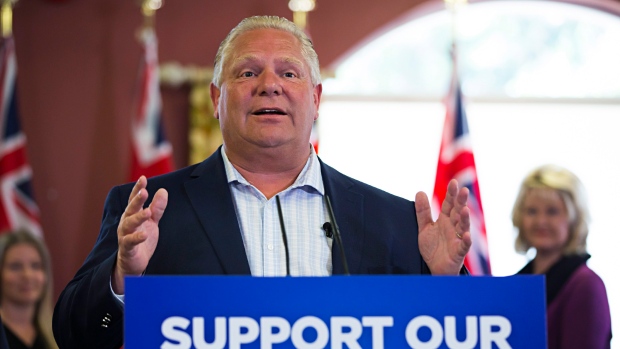 A new poll suggests Doug Ford’s Progressive Conservatives have pulled ahead of the Ontario NDP Party.

The Forum Research poll, conducted on May 28 and May 29, randomly sampled 2602 Ontario voters and found that 39 per cent of decided and leaning respondents said they support the PC Party. Andrea Horwath’s NDP Party saw 35 per cent support and only 19 per cent said they would cast their ballot for the Wynne Liberals.

Based on the results of the poll, Forum Research projects the PCs to win a majority with 77 seats. The NDP is projected to receive 41 seats and the Liberals could wind up with six, according to the poll.

When respondents were asked who would make the best premier, Forum says its latest numbers show Horwath and Ford statistically tied at 30 and 29 per cent respectively.

“As we enter the final days of the campaign, it looks like things are just getting started,” Lorne Bozinoff, president of Forum Research,” said in his analysis accompanying the poll.

“The NDP had the momentum but seem to have stalled in the aftermath of a strong performance by Kathleen Wynne in the debate. The PC numbers under Ford have rebounded and they now have him poised for the Premier’s chair. The only thing that’s certain is that the future of Ontario will be decided in the next seven days.”

Voters head to the polls in exactly one week on June 7.