A partial derailment halted subway service on a busy stretch of Line 2 for four hours during the morning rush hour on Wednesday, leaving thousands of commuters late and frustrated.

Starting at 6:12 a.m. Wednesday, all trains stopped travelling between Jane and Ossington stations, and shuttle buses were dispatched shortly thereafter.

TTC Spokesperson Stuart Green said one car of a six-car train departing a yard near Keele Station partially derailed, and would need to be removed before repairs could be made to the track beneath it.

He said three of the six cars in the train passed through a switch near the yard without a problem, but the fourth somehow came off the rails as it passed through.

Green said the train needed to be “de-coupled” and picked apart like a child’s toy train set so that crews could get underneath the derailed car and set it straight.

Commuters formed long lines to board the shuttles at each of the seven impacted stations. 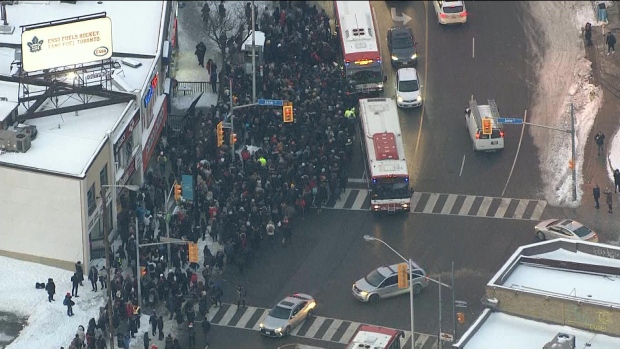 The TTC said 100 shuttle buses were sent to serve stations in the impacted service area.

“They were no match for a morning commute from the west end at our busiest time of day,” Green said.

The crush of commuters forcing their way onto each train prompted police to close Bloor Street to regular vehicle traffic between Royal York Road and Jane Street for approximately an hour.

Officials urged commuters to use their TTC fare to board GO Transit vehicles at Dundas West and Kipling stations in order to alleviate the pressure.

One man told CP24 the transit delay wasn't well received by his boss, and that he likely lost his job as a result.

Green said a full investigation will be conducted to determine why the car came off the rails.