Shortly before 5 a.m., fire crews responded to a structure fire at a home at 95 Gainsborough Road, near Coxwell Avenue and Eastwood Road. 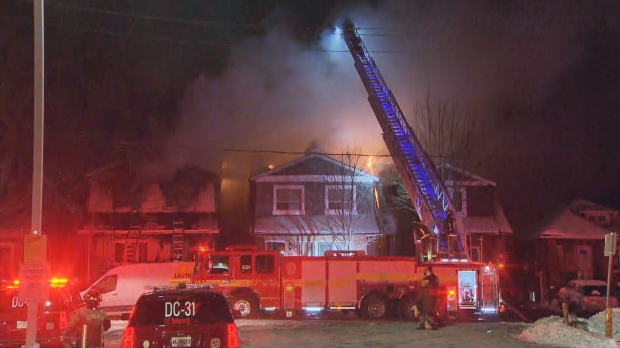 The second floor of the house was fully engulfed.

The fire spread to one adjoining home and houses on both sides were evacuated.

Five other occupants were removed from the home and four have been pronounced deceased, Toronto Fire Services Deputy Chief Jim Jessop said from the scene.

Two people are in hospital, one is in critical condition and the other is in stable condition, Jessop added.

The identities of the victims have not been identified.

All victims were removed from the residence at 95 Gainsborough Road.

Area residents told CTV News an elderly woman lives in the home with her daughter and grandson. Other family members were known to stay at the home and at least one person is believed to be a tenant. 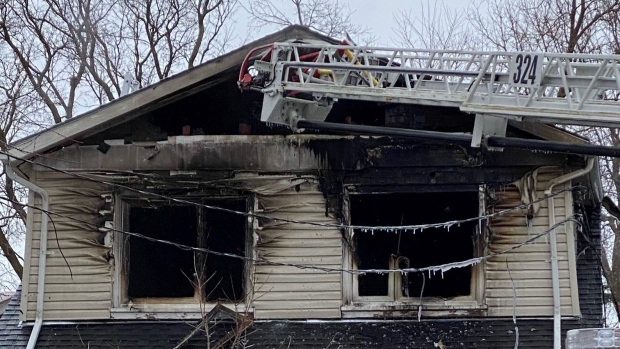 "A- we had a firefighter overcome with heat, B- a firefigher caught in the flash over, and C- a firefighter fell through the floor. I'm happy to report that they will report to duty very shortly and they are fine," Jessop said.

The cause of the fire is unknown and the Office of the Fire Marshal has attended the scene.

"This was a significant fire. The conditions that the women and men of Toronto Fire that entered that building ... were extreme. The fire was venting out, it was free burning," Jessop said.

Toronto Fire Services Chief Matthew Pegg extended his condolences to the victims from the scene.

"This is one of the worst tragedies by fire that I've seen in my career and I can tell you that our team has performed really well. I've had the chance now to meet with our senior command team and many of our firefighters on the scene and these are tough days. So my admiration to them all," Pegg said.

A TTC bus is at the scene to provide shelter for community members. 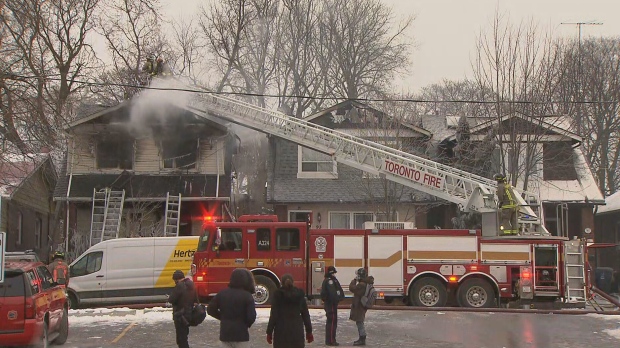 Powell said the cold weather conditions made it difficult to put out the blaze.

"Cold weather is always an issue fighting fires. Water and some freezing temperatures make very slippery working conditions. Wind, it was quite windy this morning, helps to fuel fire. So the conditions are quite tough for our firefighters," he said.

Jessop said the last multi-fatal fire that he attended that was similar to this blaze was at 1315 Nielsen Road where four people also died.

"Prior to that you're literally going back into the late 80s and early 90s in the city of Toronto. This is unusual thank goodness. It is tragic and that is why it is critically important that our team, along with the Fire Marshal's Office, finds out what happened to prevent this from happening again," he said.

Road closures are in effect on Coxwell Avenue between Eastwood Road and Gerrard Street East. 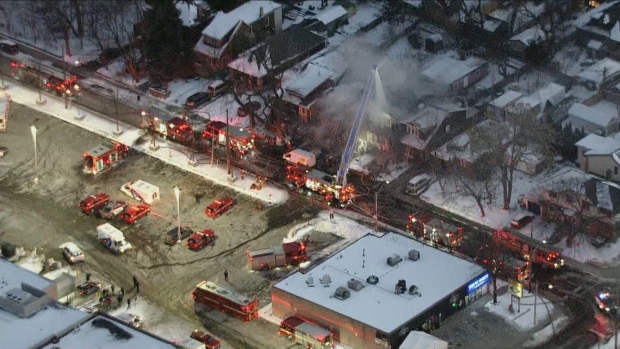 Speaking with reporters at the scene on Friday morning, an investigator with the Office of the Ontario Fire Marshal said that the structural integrity of the building still needs to be assessed before the scene investigation can begin.

He said that efforts were also underway to bring heaters to the scene, both to assist investigators and prevent some of the water that has pooled inside the home’s basement from freezing.

“It definitely does add another layer we have to deal with logistically,” Jason Williams said. “Obviously there was a large amount of water utilized during suppression activities. We are going to have to deal with that water and potentially even pump out the basement. What we would like to do is not have the water freeze so we will be deploying large heaters to assist with that.”

On behalf of all of us at @Toronto_Fire, I extend deepest condolences to family, friends and all those impacted by the tragic fatal fire on Gainsborough Road this morning.

Investigators were able to access the home in the afternoon.

When asked if foul play is involved, Jim Lawson, an operations manager with the Office of the Fire Marshal, said it is too early in the investigation to determine that.

Lawson said it is rare to have four people die in a fire, given the early detection devices that are available.

"There are circumstances depending on how the house is made up if there are any blockage of areas, escape routes," he said.

"I don't know if that's the circumstances here. Of course, that's something that we all should be practicing at home is all of our safety escape plans and to make sure we can get out of our buildings. And of course, to make sure that all our detection equipment or smoke alarms, and all of the equipment is working properly."

He cannot confirm at this time if the smoke detectors worked, but it will be part of their probe.

Toronto Fire said the investigation on the scene will take several days.

"This is definitely in the preliminary stages. We're starting the process to do a comprehensive investigation. And it will be all factors of the fire itself, the location of the fire, fire spread detection and all factors that contributed to this tragedy," said Deputy Chief Larry Cocco.