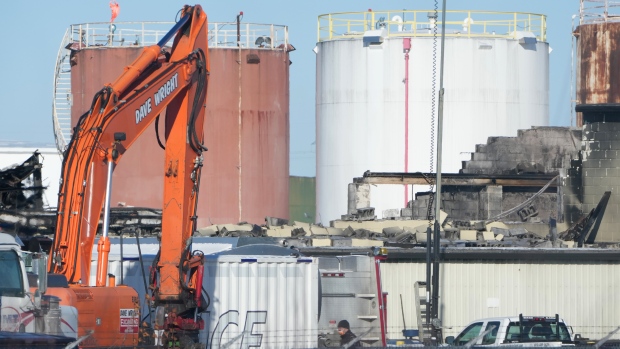 FILE - Recovery work continues at the scene of an industrial explosion in shown in Ottawa, Friday, Jan.14, 2022. THE CANADIAN PRESS/Sean Kilpatrick

OTTAWA - Investigators say they have located four sets of human remains in the site of a tanker-truck manufacturer that exploded in Ottawa on Thursday, but have not yet been able to recover the bodies.

She says investigators will recover the remains and analyze them to identify the victims and determine the cause of death as soon as it's safe to do so.

Ottawa Police Insp. Frank D'Aoust says the explosion at Eastway Tank Pump and Meter Ltd. and the fire that followed it caused the roof of the factory to collapse and completely destroy part of the building.

He says the teams working at the site are removing debris carefully and collecting evidence, but notes their efforts have been hampered by unstable conditions at the explosion site as well as frigid temperatures in the days since the blast.

D'Aoust says it's still unclear when the investigation will conclude and the cause of the explosion will be determined.

“The structure is being dismantled and searched methodically,” he said. “But this is a long process and could take several days or more. Due to how heavily damaged the building is, there are many, many layers of debris and we have to be careful.”

The explosion happened Thursday around 1:30 p.m., at the business, which is located in an industrial area in Ottawa's south end.

Ottawa police confirmed Friday that one man sent to hospital in critical condition had died and that four men and one woman believed to be at work during the blast remain unaccounted for. At that time, they also indicated they did not expect to find any survivors.

This report by The Canadian Press was first published Jan. 16, 2022.