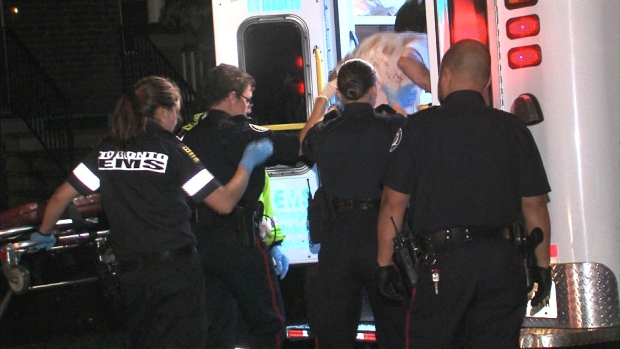 Paramedics and police assist a person who was stabbed near Queen Street West and Dowling Avenue early Thursday, July 4, 2013.

Emergency personnel were first called to the fight scene on Queen Street West, near Dowling Avenue, in Parkdale at about 1:25 a.m., where police found a man and woman who had been stabbed after the fight spilled onto the street.

By the time police arrived, two suspects, including one armed with a knife, had fled the scene, said police spokeswoman Const. Wendy Drummond.

Both victims suffered multiple stab wounds and were taken to hospital to be treated for serious injuries, a Toronto EMS spokesperson told CP24.

Police later said the victims, who are in their 20s, underwent surgery and are in non-life-threatening condition in hospital.

About 20 minutes after that call, police were called to a location on Lansdowne Avenue, just north of Queen Street, where they found the male suspects, who are also in their 20s.

Police told CP24 that the men are facing charges.

The scenes on Queen and Lansdowne are about two blocks apart. Police believe the fight started at a bar on Queen Street.