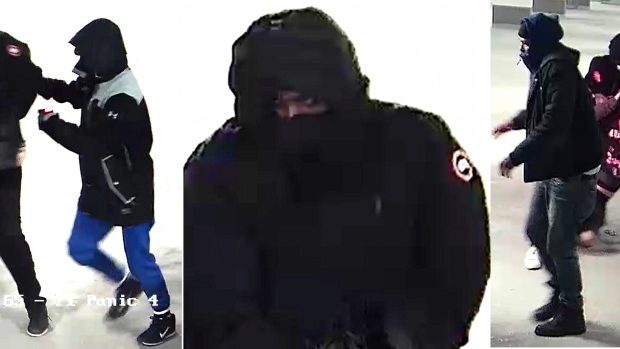 (left to right) Suspects 1, 2, and 3 in the Markham kidnapping of 22-year-old Wanzhen Lu are pictured in these images distributed by York Regional Police. (YRP /Handout)

York Regional Police have charged a fourth suspect in connection with the violent kidnapping of an international student in Markham back in March.

The kidnapping took place at a condominium building on Water Walk Drive in the area of Highway 7 and Birchmount Road on March 23 shortly before 6 p.m.

According to police, the 22-year-old victim and his female friend were in the underground parking garage when three men exited a Dodge Caravan and grabbed the victim. One of the men was armed with a stun gun.

The victim was shocked with the conducted energy weapon multiple times and shoved into the vehicle before the van sped away, police said.

Four days later the victim approached a man out walking his dog in Gravenhurst and asked him for help. He was taken to hospital to be treated for minor injuries.

Police have said that a ransom demand was made at some point, but have not provided specifics as to what was demanded and from whom.

Within about a week of the kidnapping, two suspects were arrested in the case. They have been identified by police as 33-year-old Hashim Abdullahi and 37-year-old Toronto resident Abdullahi Adan.

On April 26, police announced that a third suspect, 22-year-old Nathan Plater, had been arrested.

All three men are facing kidnapping and weapon charges.

YRP said Wednesday that a fourth suspect was taken into custody in connection with the case on July 9.

Kyle Main, 31, of Keswick is now facing a list of charges including kidnapping, forcible confinement and assault with a weapon.

He made a court appearance Wednesday morning and is expected to appear next in court on July 18.

There is currently a Canada-wide warrant out for a fifth man wanted in connection with the kidnapping, 28-year-old Muzamil Addow of Toronto.

Investigators are urging the outstanding suspect in the case to get a lawyer and turn himself in.