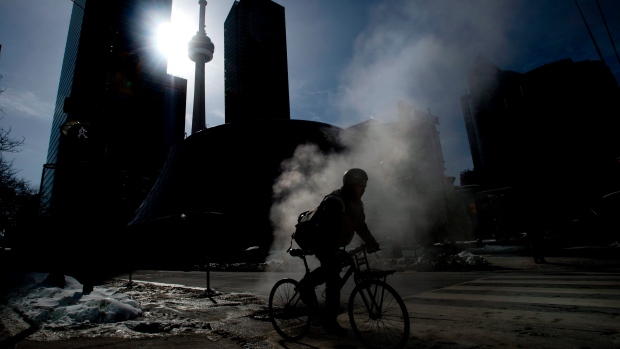 Steam rises from the street as a cyclist makes their way around Toronto on Friday, February 13, 2015. (Nathan Denette/THE CANADIAN PRESS)

The City of Toronto appears to be done with minus double-digit temperatures for now, but meteorologists now say the whole region faces considerable rainfall this weekend.

Toronto’s Medical Officer of Health Dr. Eileen de Villa has opted to life the extreme cold weather alert that has been in effect since March 3 as of noon today.

The move comes ahead of the arrival of milder conditions after a prolonged cold snap.

The temperature was – 13 C at 7 a.m. but Environment Canada says that it will climb to a high of – 1 C later today. The wind chill, however, will still make it feel as cold as – 6.

The agency has also issued a special weather statement calling for freezing rain or snow to fall across southern Ontario beginning after midnight on Saturday.

The agency says it is likely that 15 to 25mm of rain may fall until sometime on Sunday afternoon.

Some areas of central Ontario may see five to ten centimetres of snow on Sunday.

Winds are expected to hit 70 to 80 kilometres per hour on Sunday.

On Saturday the weather agency is calling for a high of 0 C with mostly sunny skies while Sunday’s forecast calls for a high of 4 C.

Toronto has been under an extreme cold weather alert on 27 different days so far in 2019.

In 2018, there were no extreme cold weather alerts issued after Feb. 12.