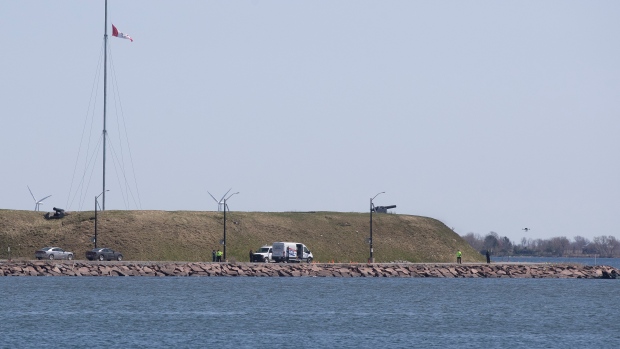 Police officers attend the scene of an incident at Point Frederick, Royal Military College in Kingston, Ontario, on Friday April 29, 2022. Government officials didn't specify how many people were involved in the incident. THE CANADIAN PRESS/Lars Hagberg

TORONTO -- One of four officer cadets who died when their vehicle plunged into water is being remembered as an outgoing athlete who was proud of the hard work he put in at Canada's Royal Military College.

Andrei Honciu had a special way of making people comfortable and acted like a “well-trained class clown,” his high school friend Noah Kim said in an interview.

“He was just one of those people who would make everyone laugh.”

Honciu, 22, was in the vehicle with Jack Hogarth, Broden Murphy and Andres Salek when it entered the waters that border the campus in Kingston, Ont. Each of the men, who were poised to graduate, died early Friday.

National Defence has released few details about the fatal incident, saying only that the four died after the single vehicle entered the waters at Point Frederick on campus at about 2 a.m. An investigation is ongoing.

Hogarth was in military and strategic studies and hoped to be an officer in an armoured regiment, the Defence Department said.

Murphy, a business administration student, was working to become an aerospace environment controller. Salek, a student of military and strategic studies, also wanted to be an armoured officer.

Honciu also studied business administration and planned to be a logistics officer.

When Honciu came home to Toronto for holidays, he often told his friends that studying was tough and it took a lot of hard work, Kim said.

Honciu said it in a proud way, said Kim, who got the sense his friend felt good about meeting the challenges.

“It was baby steps for what he eventually wanted to do in the future,” Kim said.

Kim said he was initially intimidated by Honciu when he met him for the first time in math class as a new student at Northern Secondary School in Toronto, but Honciu took the initiative to break the ice.

“We ended up chatting a lot in math class, probably chatting more than studying,” Kim said.

The pair also enjoyed playing football and soccer together, motivating one another to do better through friendly competition.

Kim said he'll also remember Honciu's affection for his little brother. After initially expressing doubt about how to act around a baby, Kim said he embraced the new role and would share photos of the pair together throughout high school.

“He eventually leaned toward the side of, 'I'm going to be the best big brother ever,' ” Kim said.

“You know, it's all very, very sweet. So you just know that he's got a real big heart.”

Prime Minister Justin Trudeau has said in a statement his heart breaks for the families and friends of the four who died, while RMC Commandant Josee Kurtz has said the entire college community is devastated by the loss.

A spokeswoman for National Defence said details concerning any memorial service will be communicated at the wishes and discretion of the victims' families.

From left: Jack Hogarth, Andrei Honciu, Broden Murphy, and Andres Salek are seen in this combination photos from the Royal Military College. The four cadets were killed in a vehicle incident on campus on Friday, April 29, 2022. (Supplied)