Friends of missing Cabbagetown man appeal to public for information 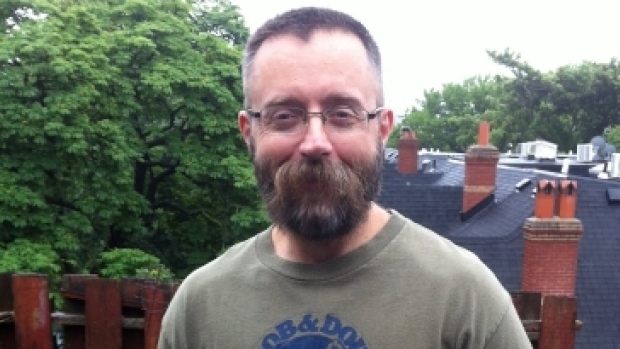 Close friends of a 49-year-old Cabbagetown man begged the public for information about his whereabouts Thursday, calling the disappearance completely “out of his character.”

Andrew Kinsman was last seen near Parliament and Winchester Streets on June 26.

Last week, Toronto police indicated they were concerned for his safety and escalated his case, calling his mysterious disappearance “suspicious.”

Friends of Kinsman have spent the past week putting up flyers on city street posts downtown and throughout the east-end in an effort to gain a lead on his whereabouts.

Speaking to reporters at a news conference, two of Kinsman’s closest friends said they were alarmed last week when they noticed his garbage hadn’t been taken out nor his beloved cat fed.

“Andrew is one of the most responsible people I know. He would never leave the house without making sure that the garbage was taken out, that everything was organized,” friend Cecilia Saez said through tears. “He would always touch base with me to see if I could do something and he just didn’t.”

Ted Healey, who says he’s been friends with Kinsman for 20 years, said his last sighting of Kinsman was at Toronto Pride celebrations on Church Street on June 25.

“He was happy, he was upbeat, he talked about his job, he was hopeful about his job and we joked around about,” Healey said. “It maybe lasted about 15 minutes or so and we separated.”

“It’s just totally out of character for him to up and leave like that.”

Kinsman is described as standing approximately six-foot-two with a medium to stocky build, a brown buzz-cut and a beard.

Police say Kinsman wears glasses and has a vertical scar on each of his knees from medical procedures. He also has tattoos on his right bicep and left side of his chest.

According to a Facebook page, Kinsman worked at the Toronto HIV/AIDS Network advocacy group and is a volunteer for the Toronto People with AIDS Foundation.

Today, police asked anyone who may have been in contact with Kinsman online, through dating apps or otherwise, to call them.

"His friends and colleagues know what those apps are.  We’d love to hear from you,” Det. Barry Radford said. “I can’t express the importance of hearing from you.”

Kinsman’s disappearance has been highlighted on social media as one of several LGBTQ men who have gone missing since 2010 – two of whom went missing in recent months.

Zhu Jian “Frank” Wang, 25, has been missing since May 23. Wang was last seen near Yonge and Gerrard streets.

Three others – 42-year-old Abdulbasier “Basir” Faizi, 58-year-old Majeed “Hamid” Kayhan and 40-year-old Skanda Navaratnam – all disappeared from Toronto’s Village near Church and Wellesley streets between 2010 and 2012.

Police would not say whether the cases are connected.

“I’m just very afraid,” Saez said through tears. “I’m afraid for his safety. I’m pleading now for some information… any tips that can lead us to find out what happened to Andrew.”