Front-line workers who left LTC homes in May won't come back, commission hears 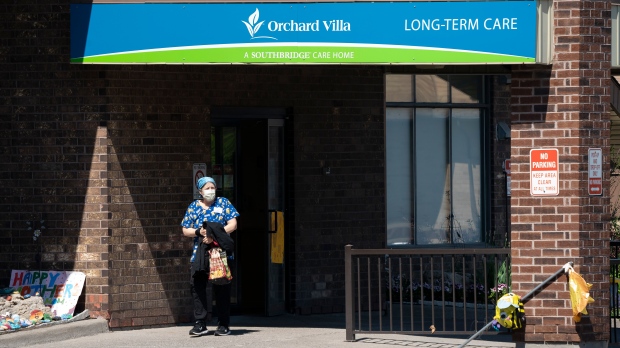 A home-care worker is shown outside Orchard Villa long-term care home in Pickering, Ont., on Tuesday, May 26, 2020. THE CANADIAN PRESS/Frank Gunn

Many of the personal support workers who left Ontario's long-term care system in the first months of the COVID-19 pandemic due to poor pay and lack of full-time jobs have not returned, an independent commission has heard.

Sharleen Stewart, the head of SEIU Healthcare - the largest union in the long-term care system representing personal support workers - told the Long-Term Care COVID-19 Commission earlier this month that the system now employs 30 per cent fewer PSWs than before the pandemic was declared in March.

Despite the province's promise to address the staffing shortages at long-term care homes, the majority of jobs for personal support workers, who were asked to choose one job to prevent staff from spreading the virus, remain part-time, Stewart told the commission.

“They still to this day are not providing full-time work to those workers who had to choose one job,” Stewart told the commission on Oct. 15.

“So we're in a worse condition than we were back in January.”

COVID-19 ripped through long-term care homes in Ontario, making its way inside 55 per cent of the 626 homes during the first wave of the pandemic in the spring.

A second surge has taken hold this fall with outbreaks declared in 83 homes by late October, up from 32 homes in September, according to provincial data.

The commission is investigating how the novel coronavirus spread in the long-term care system and will submit its final report on April 30, 2021. Its hearings are not open to the public and transcripts of testimony are posted online days later.

Last week, the commission issued a series of interim recommendations to help the homes and said “more full-time positions must be created to ensure staffing stability and retention, and resident continuity of care.”

Vickram Sooknanen, a personal support worker at Midland Gardens Care Community in east Toronto where 42 residents died of COVID-19, said he and his colleagues on the front lines just want to be heard.

“As a worker, do I have faith that things are going to change? To be totally honest, I don't think so,” he told the commission.

He said confusion reigned early on in the pandemic, with mixed messages coming from public health, the ministry and the homes.

“We'd still go to the break rooms, we'll put our masks down, and then we'll pick up the same mask and wear it continue going from resident to resident,” Sooknanen said.

He said patients suspected of having COVID-19 sneezed and coughed on him while he wore the handout surgical masks.

When doctors came in, they wore the more protective N95 masks and isolation gowns, which upset Sooknanen. He asked the home if the workers should also be wearing the same protective gear.

“But they keep telling me that, you know, they're following all of the public health protocols and all of the directives and that our company has all these infection control experts,” Sooknanen said.

He said the home had trouble retaining staff before the pandemic and it only got worse after.

On May 7, they began mass testing everyone in the home. Sooknanen said he began feeling ill the next day, his day off. He checked his test result online: negative.

He said he called his family doctor who told him to go to the hospital to get tested. So he did. The test came back positive for COVID-19.

Sooknanen was among more than 60 staff in the home who contracted the disease.

Jocelyn Barras, a full-time registered practical nurse who works at Cooksville Care Centre, a nursing home in Mississauga, Ont., told the commission she was assigned to screen people for the disease in late March.

She asked the director of care if she could wear a mask.

“And she answered me back, 'if you use mask, I will send you home,”' Barras said.

She said the home declared a COVID-19 outbreak on April 7. The home then gave out surgical masks only to those who worked directly with residents, she said.

About a week later, the workers asked for fitted N95 masks for greater protection against the virus.

They were given non-fitted N95 masks and were told to clean them with alcohol spray so they could be reused.

“But most of us, we develop allergy, like sneezing, itchiness, after two to three days reusing the mask,” she said.

Residents with COVID-19 had trouble swallowing, but also needed to be fed.

“And because of difficulty swallowing, mostly they are coughing during meal time, and we are so close to their faces and mouths,” she said.

The workers asked the home again for fitted N95 masks to no avail, she said.

“I could see that they had a fitted N95 locked inside the administrator office at that time,” Barras said.

Twenty one residents died from COVID-19 at Cooksville and most of the staff contracted it, she said.

“When the resident died, and no one's family beside them. And we, including myself, I wrap, I wrap the dead body in a plastic bag, in the black bag and push them out our home,” she said.

“That is the most devastating in my life experience. And I know I am not protected that time.”

Earlier this month, Ontario said it would give pay raises to personal support workers throughout the health-care system in a bid to recruit and retain them during the COVID-19 pandemic. That pay raise expires in March 2021.