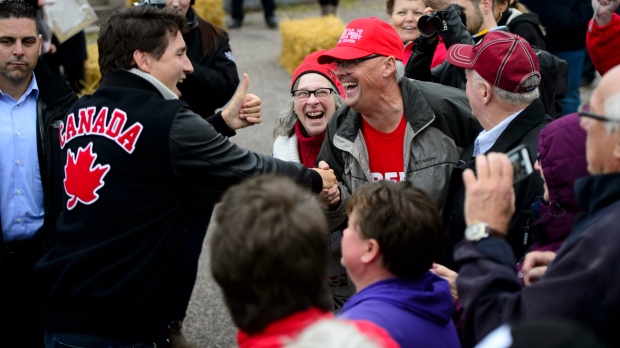 Liberal Leader Justin Trudeau shakes hands with Ronnie Costain of Summerside, P.E.I., as he holds a rally at the home of Liberal candidate of Lawrence MacAulay, in Midgell, P.E.I., Tuesday, Sept. 17, 2019. THE CANADIAN PRESS/Sean Kilpatrick

OTTAWA -- The opening week of the federal campaign did little to change the dynamic of the race to the Oct. 21 election, a new poll suggests.

Respondents to the Leger poll, conducted Sept. 13-17 for The Canadian Press, put the Liberals and Conservatives in a virtual tie. Support for the governing party was unchanged at 34 per cent while the Tories were down two points to 33 per cent.

The NDP and Greens continued in a dead heat for a distant third place, with 12 and 11 per cent respectively, unchanged from a Leger poll conducted just prior to last Wednesday's official launch of the campaign.

Maxime Bernier's fledgling People's Party, meanwhile, was up one point to four per cent.

While the national numbers showed no statistically significant change, the poll detected a number of slight shifts in opinion, cumulatively suggesting a bit of an uptick in Liberal fortunes at the expense of the Conservatives over the course of the opening week.

On the question of who would make the best prime minister, Liberal Leader Justin Trudeau was up two points to 27 per cent, Conservative Leader Andrew Scheer was down one point to 22 per cent.

The Greens' Elizabeth May was named best PM by eight per cent of respondents, the NDP's Jagmeet Singh by seven per cent and Bernier by just three per cent.

The appetite for change was slightly diminished, with 54 per cent saying they want a change in government, down three points from the last Leger poll. Thirty per cent said they want to continue with the current Liberal government, up two points.

Overall, Leger executive vice-president Christian Bourque said the results reflect a common finding in the opening days of a campaign, when voters are in a "wait and see" mode.

"Very often the needle doesn't move early on in the campaign," he said in an interview.

Still, he said the Conservatives need to pick up momentum if they're going to stop the Liberals from winning re-election.

In regional results, which are somewhat less reliable because of the smaller sample size, respondents continued to give the Liberals the edge in the two provinces that account for almost 60 per cent of the 338 seats up for grabs on Oct. 21.

In Quebec, Liberal support was at 36 per cent, compared to 22 for the Bloc Quebecois, 21 for the Conservatives, 10 for the Greens, seven for the NDP and three for the People's Party.

In Ontario, Liberals enjoyed the support of 38 per cent, five points ahead of the Conservatives. The NDP were at 13 per cent, the Greens at 12 and the People's Party at four.

The poll suggests the Liberals held a commanding lead in the Atlantic provinces, with 46 per cent support, more than 20 points ahead of the second place Conservatives.

British Columbia was more of a toss up, with the Conservatives leading at 31 per cent support, followed closely by the Liberals at 29 per cent. The NDP stood at 19 per cent, the Greens at 16 and the People's Party at six.