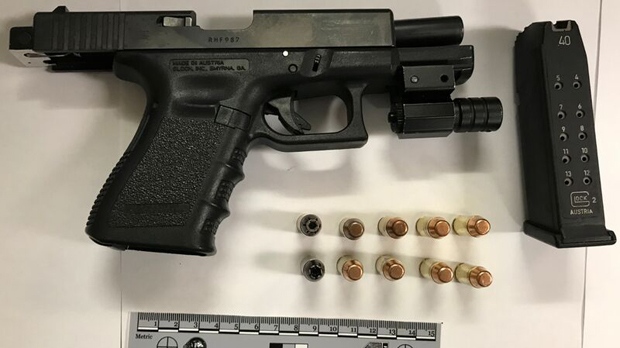 A 23-year-old Toronto man and a teenage boy are in custody after a handgun altered to allow fully-automatic fire was allegedly seized in a home in the Jane and Finch area on Tuesday.

Police say they came across two males they believed to be in possession of a handgun.

They later searched a home in the Jane and Finch area and allegedly seized a .40 calibre Glock 23 handgun.

It was found to have a laser sight attached underneath its barrel and investigators allege it was altered to allow it to fire multiple or all of its rounds with one press of the trigger. An overcapacity magazine was also found, investigators allege.

Fully-automatic firearms are strictly prohibited in Canada, only used by the military and police tactical teams.

A suspect identified as Tyrell Mingo and a 16-year-old boy who cannot be identified per the terms of the Youth Criminal Justice Act were arrested.

Both face 14 charges including careless use of a firearm, possession of a loaded prohibited firearm and making an automatic firearm.

Both appeared in court at 2201 Finch Avenue West on Wednesday morning.