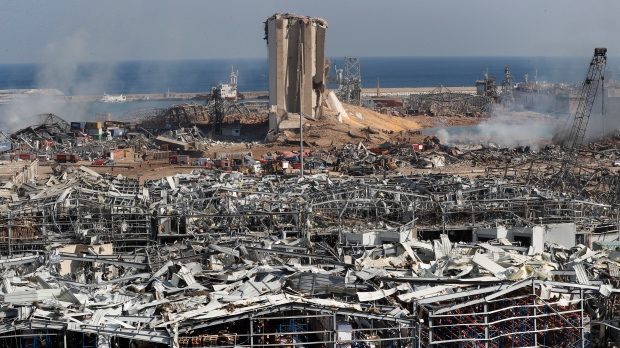 Rescue workers and security officers work at the scene of an explosion that hit the seaport of Beirut, Lebanon, Wednesday, Aug. 5, 2020. (AP Photo/Hussein Malla)

OTTAWA - The federal government is increasing how much it will match in contributions to humanitarian relief in Lebanon following an outpouring of support from Canadians.

International Development Minister Karina Gould announced Wednesday the government will now match up to $8 million in individual contributions made by Aug. 24 to the umbrella aid agency Humanitarian Coalition.

Ottawa had originally earmarked $2 million for the matching fund, before expanding it to $5 million last week.

Gould said the Humanitarian Coalition told the government it was on track to reach the $5 million target, and there's almost a week left for Canadians to donate before the cutoff.

“In response to the incredible generosity of Canadians, we felt it was very important to ensure the dollars that they're donating will go as far as possible,” she said.

The money will come from the $30 million the Liberals committed to provide emergency aid after a blast in the country's capital of Beirut on Aug. 4. The explosion at the port killed 180 people, injured about 6,000 and has left nearly 300,000 people homeless.

Gould said a decision announced Wednesday on how $13.5 million will be allocated comes in response to a US$565 million appeal launched by the UN last week to help with immediate assistance and recovery efforts.

“It's quite significant ... that's just really just to address the humanitarian crisis over the next three months,” Gould said of the international appeal for funds.

“We've tried to respond in terms of what the greatest needs were.”

Gould said Wednesday that $5 million will go to the World Food Programme to support critical food assistance needs after the blast destroyed the main grain silo in Beirut's port, escalating a food crisis in the city.

An additional $500,000 will go to the Lebanese Red Cross, on top of the funds Canada has already committed to that agency.

Where to allocate Canada's remaining funds will be based on needs and what some of the early recovery looks like, Gould said.

Canada is directing all of its aid for this crisis directly to humanitarian organizations, not the Lebanese government, to ensure the assistance goes to those in need, Gould said earlier this month.

Any direct aid to the government of Lebanon would only come with “significant fiscal and political reforms” in light of widespread domestic and international concerns about corruption and poor governance in the country, she told reporters at the time.

This report by The Canadian Press was first published Aug. 19, 2020.