'Get in my car,' Innisfil boy describes luring attempt by man in his driveway 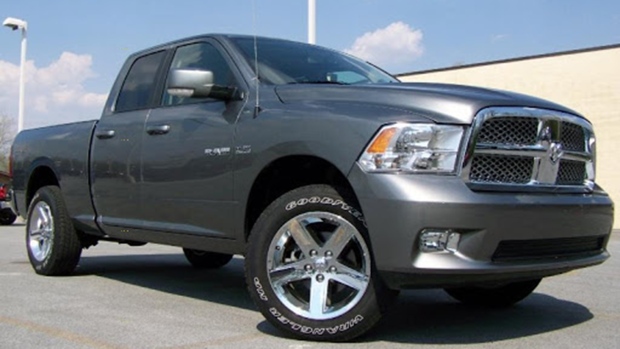 A Dodge Ram 1500 similar to the one pictured is sought after two separate luring incidents in Innisfil, Ont. on June 7, 2021.

A mother in Innisfil, Ont. says she no longer wants to let her kids play outside after an unknown man approached her son earlier this week and tried to get him inside his truck, and police say the same man approached others that day for the same purpose.

Yolanda Marquez said that on Monday afternoon, her son Emmanuel was playing in the driveway of their home when a man pulled up.

“I’m playing in the front yard, basketball, I was about to shoot and I see the grey truck driving by slowly,” Emmanuel, 11, told CP24. “At one point he just stopped, rolled down his window and signalled with his hand to get in the car.”

Emmanuel said he ran inside his home, locked the front door and urged his sister to dial 911.

“The child did the right thing and ran into the house to alert a family member who called police,” South Simcoe Police said in a statement issued on Tuesday.

Emmanuel said from inside his house, he could see the man staring at him from their driveway.

Only when he made eye contact with Emmanuel’s sister did he retreat back to his car and drive away.

Emmanuel said the man was white, “very short,” with grey hair and a moustache. He wore eyeglasses and a grey ball cap, a blue and white buttoned shirt, and his pickup truck was grey.

South Simcoe Police said Wednesday they believe the truck is a Dodge Ram 1500.

Emmanuel said police officers and a canine unit came to their home and interviewed him.

Yolanda says her children recognized the truck from earlier passes by the house, as recently as Sunday and as far back as winter 2021.

“This guy has been watching us for a long time.”

About five hours after Emmanuel was approached, South Simcoe Police said they were called to a similar incident 12.5 kilometres south, near the corner of Ewart Street and Killarney Beach Road.

In that occurrence, a 23-year-old woman reported she was walking down the street with a friend when a man matching the description of the earlier incident, driving a grey pickup truck approached them both.

“The man unsuccessfully tried to engage the young women in a conversation and then drove away,” police said.

Yolanda said she encourages her son to be outside, to avoid screen time, but now, she fears for her children’s safety.

“Now, even I don’t trust to leave them inside my house.”