Girl, 10, with cerebral palsy to get new toy car after Barrie theft 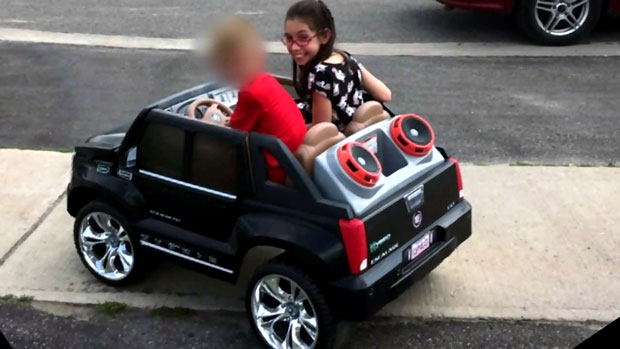 Hilary Fogarty is seen in her toy car before it was stolen in Barrie.

Barrie police say a 10-year-old girl with cerebral palsy is getting a new toy car to help her get around after hers was stolen on Sunday night.

In a tweet sent out on Monday night, Barrie police said ToysRUs has offered the young girl a new toy car to replace her stolen mode of transportation.

“She is not able to walk on her own and requires a power wheelchair,” Denise Fogarty said about her daughter, Hilary. “And to change it up a bit, we bought her a (toy) Escalade.”

Fogarty told CTV News Toronto on Monday afternoon that she believes her daughter’s toy car, which is usually parked in front of their home, was stolen over the weekend.

“From an eyewitness, they said a grown man and a child walked up to our property from the centre of the road behind me,” she said. “And the grown man pulled it down, and proceeded to the park, where the child got in it, started it and proceeded toward Prince William (Way).”

Without the car, Hilary’s mother was concerned about her daughter’s loss of independence and wondered how someone could take the toy car away from their home.

“How can you do this to another child? You’re obviously a parent yourself because you were seen with a child. Would you like that done to you?” Forgarty asked.

“She wants to do everything like everybody else does,” said Meghan Fogarty. “She doesn't want other people pushing her in her stroller and a wheelchair.”

Despite the fact that Hilary will be receiving a new toy car in a matter of time, her family says they hope the person who took the toy car will realize he stole from a disabled child and have a change of heart.

The suspect involved in the incident has been described as a five-foot-eight white man with a medium build. At the time, he was seen with a young boy, about four or five years old.