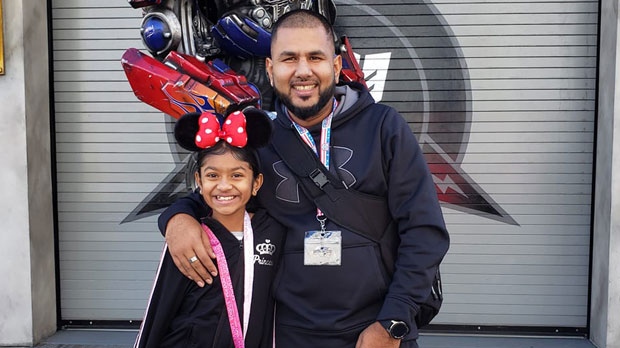 Riya Rajkumar, 11, and Roopesh Rajkumar, 41, are seen in this photo provided by Peel Regional Police.

An 11-year-old girl, who was the subject of an amber alert Thursday night, has been found dead inside a Brampton home.

At around 11 p.m., officers said they were investigating a parental abduction in the area of Hurontario Street and Derry Road in Mississauga.

At the time, officers said they were searching for Riya Rajkumar and her father, 41-year-old Roopesh Rajkumar, in a 2005 silver two-door Honda Civic.

The young girl did not reside with her father on a full-time basis, according to investigators.

“Roopesh Rajkumar was to ensure his daughter returned to be with her mother by a certain time but failed to do so,” a news release issued by police on Thursday night said. “Roopesh has since made comments indicating he was going to harm himself and his daughter.”

Police then said the girl was found deceased inside a Brampton home and confirmed the homicide and missing persons bureau had taken over the investigation.