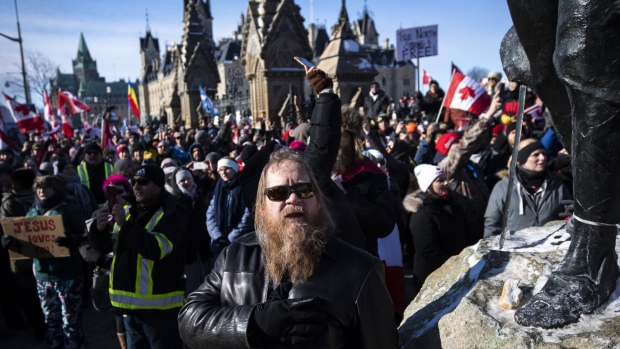 A person holds their hand to their heart during a singing of O Canada during a rally against COVID-19 restrictions on Parliament Hill in Ottawa on Sunday, Jan. 30, 2022. A parliamentary committee is hearing today from representatives of two crowdfunding platforms organizers used to raise money for a weeks-long protests in downtown Ottawa. THE CANADIAN PRESS/Justin Tang

The co-founder of GiveSendGo, a crowdfunding platform used by protesters who blockaded the national capital, testified Thursday to being OK with hate groups like the Ku Klux Klan and Proud Boys fundraising on the site, so long as it was legal.

The statement emerged from one of the many testy exchanges between MPs on a parliamentary committee and Jacob Wells and Heather Wilson, siblings who founded the U.S.-based site they describe as Christian.

The platform became the vehicle used by organizers of a weeks-long protest in downtown Ottawa last month after GoFundMe cancelled an earlier campaign that raked in more than $10 million.

That decision came after GoFundMe consulted with police in Ottawa about the protest, company president Juan Benitez told the committee separately on Thursday.

There were also reports of local businesses facing harassment by those involved and concerns raised over some protesters displaying swastikas and other Nazi symbols.

MPs pressed the GiveSendGo founders for allowing protest organizers to use their site to raise millions of dollars after the city of Ottawa declared a state of emergency over the situation.

Wilson said she believes it was wrong of GoFundMe to pull the plug on the initial fundraiser and said many of the campaigns they host turn to them after being removed due to "political beliefs."

She also questioned why the federal Liberal government didn't reach out directly to GiveSendGo with concerns about the site facilitating funding. Wilson said the information they were receiving about the situation was "hearsay" from media reports.

"I really believe that if Trudeau had just come out and spoken with the truckers when they got there, a lot this would have been avoided," she added.

Wells said most of the donations made were under $100 and confirmed that roughly 60 per cent of the money originated from Canada, while about 40 per cent came from the United States.

He told MPs he saw the protest as being "largely peaceful" and felt there were efforts by what he called a "fringe percentage" of the group to ruin it.

While he emphasized how the platform values freedom, committee member and Liberal MP Pam Damoff questioned its ties to the Proud Boys, which in Canada are listed as a terrorist entity and have used the site for fundraising.

"If we started mandating litmus tests for how good people ought to be in order to use public services, we would be in a very, very difficult situation," Wells said.

"We believe completely to the core of our being that the danger of the suppression of speech is much more dangerous than the speech itself."

In response, Damoff quipped: "My brand of Christianity is very different than yours if it includes hate."

The committee heard Thursday that the more than US$8.4 million raised through the site remains in an American bank account after the Ontario government successfully petitioned a court to freeze its distribution.

Earlier in the hearing, MPs heard from GoFundMe representatives about their decision to release $1 million to a protest organizer, nearly two weeks after the fundraiser began and before it was cancelled.

Kim Wilford, counsel for GoFundMe, said at the time there was nothing to signal there were issues with organizer Tamara Lich, who now faces mischief-related charges linked to her role in the protest.

The money was provided with information on how the funds would be dispersed, including how leftover cash would be sent to registered charities, Wilford said.

It was after the money was released that Benitez said the situation took a turn.

"Things immediately and very rapidly changed," he said. "Communication changed, information on the facts changed, the convoy itself changed and we responded to those changes."

He took MPs through a timeline of how it started monitoring the campaign on Jan. 15, one day after it was launched, because of how many people started contributing.

At the time Benitez said the fundraiser fell within its terms of service.

But by Feb. 4, after consulting with local police, GoFundMe decided to axe the campaign, which at that point had topped $10 million, and began offering refunds to donors.

The committee heard that more than 85 per cent of the campaign's donations came from Canada and the federal Liberal government never reached out directly with any concerns.

Benitez said while there are lessons to be learned from the experience, he hopes MPs recognize the action taken by GoFundMe.

"The freedom convoy fundraiser was unique," he said.

This report by The Canadian Press was first published March 3, 2022.