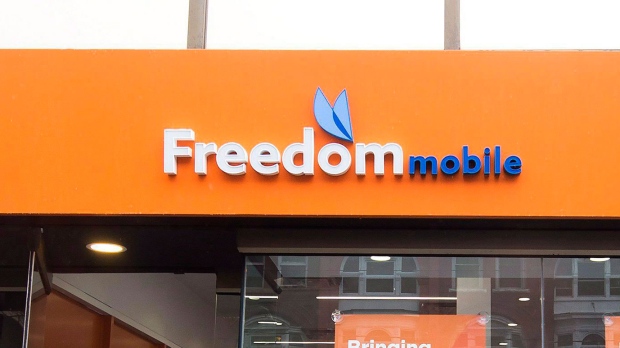 A Freedom Mobile store is pictured in Toronto on Thursday, November 24, 2016. THE CANADIAN PRESS/Nathan Denette

TORONTO - Globalive Capital says it has signed a network and spectrum sharing agreement with Telus Corp., in an effort to boost its bid to purchase Freedom Mobile.

The sale of Freedom is expected to be a condition of that deal's approval by Innovation, Science and Economic Development Canada, and is seen as the best way to maintain competition in the wireless space while allowing the merger to move forward.

However the deal is facing opposition from the Competition Bureau, which argues the merger should not go ahead even if Freedom Mobile changes hands.

In May 9 filings to the Competition Tribunal, the regulator said the sale of Freedom Mobile would fail to add competition to the telecom sector, arguing that the new owners “are likely to provide less effective financial, managerial, technical or other support,” making it harder for the carrier to go up against Rogers, BCE Inc. and Telus.

In the court documents the watchdog also said that the proposed deal between Rogers and Shaw would undo more than a decade of regulatory efforts to increase competition in the telecom sector.

The Globalive agreement is conditional on its successful acquisition of Freedom Mobile.

Globalive founder and chairman Anthony Lacavera said his firm's ownership of Freedom would ultimately lead to cellphone bills coming down and will provide customers with “the same network experience” customers of Canada's big telco companies get.

Lacavera also said that he will continue to invest in Freedom and build out the network if Globalive's bid for the carrier is successful.

“We're planning on going forward and acquiring more spectrum in upcoming auctions that we will then subsequently share in the spectrum and network sharing agreement with Telus and further expand the capabilities of the Freedom network,” he said in an interview.

Lacavera added that his bid will address the Competition Bureau's concerns regarding the sale of Freedom and the Rogers-Shaw deal overall.

Winseck said he's also skeptical of the agreement because he believes it goes against Telus' own business interests and the efforts the big telcos have made over the years to essentially limit the ability of independent mobile operators to develop as viable rivals.

“We're being asked to accept that Telus is somehow going to break character here and allow Freedom to become a very formidable player in that it will have the resources and access to compete with Telus, Rogers and Bell on the basis of price, on the availability of access and on the size of data allowances, and I can't see that happening.”

He said Telus would “keep Freedom on a short leash” and wouldn't allow it to challenge it on pricing or sizes of data allowances.

Telus already has a network sharing agreement with Bell, which could further complicate Globalive's deal, Winseck added, and will likely need to be brought into the discussion.

In addition to Globalive, Quebecor Inc. has expressed interest in the carrier. Meanwhile, rural internet provider Xplornet Communications Inc. has reportedly been presented to regulators as a potential buyer.

Lacavera has said he'd like to see a U.S.-based carrier such as T-Mobile step in, if Globalive isn't the successful bidder.

Freedom Mobile, formerly known as Wind Mobile, was founded by Lacavera in 2008. After financial troubles and foreign ownership challenges, Wind Mobile was sold to Shaw in 2016 and underwent a rebrand.

- With files from Craig Wong