One female pedestrian is dead and a Good Samaritan who tried to help her is in critical condition following a collision in Brampton Friday morning, Peel Regional Police say.

Police say they responded to reports of two female pedestrians who were struck in the area of Heritage Road and Steeles Avenue at around 5:45 a.m.

"Officers arrived on scene and sadly found one female pedestrian who was vital signs absent, so she was deceased at the scene. Another female was taken to a trauma center with serious life-threatening injuries," Const. Mandeep Khatra said at the scene Friday morning.

Police said the deceased pedestrian is 41 years old and the woman in hospital is 30 years old.

The two victims have not been identified, but Amazon Canada confirmed in a statement that both women were its employees.

“We are deeply saddened to learn of the passing of our colleague, and we offer our heartfelt condolences to their loved ones. Our thoughts are also with our employee who is currently in hospital,” said Amazon Canada spokesperson Ryma Boussoufa.

“We are providing support resources for the victims’ families and our workforce. We are also offering our full cooperation to local authorities.”

An Amazon facility is located near the intersection.

Khatra said there were multiple vehicles involved in the collision. Two vehicles remained on scene and one vehicle, a mid-sized SUV, remains outstanding. It was last seen heading westbound on Steeles Avenue.

"We urge that driver to please contact police, speak to legal counsel and call us as soon as possible," he said. 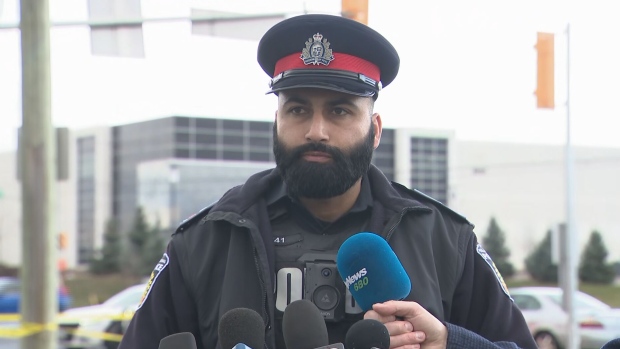 Khatra said the pedestrians were on the east side of the intersection crossing south before the first pedestrian was struck by a vehicle travelling eastbound.

"She landed in the in the westbound lanes, sadly, and then was struck again by another vehicle travelling westbound and the second vehicle is the one that we're looking for."

Khatra said the woman was struck again by a third vehicle, which did remain on scene.

The second pedestrian involved went to assist the woman and was struck in the process, Khatra said. 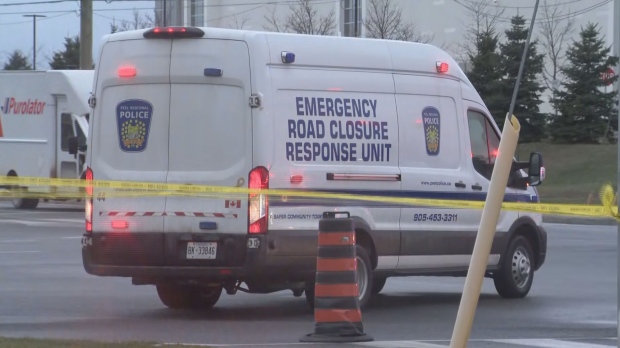 "It appears that she tried to help the first victim and was struck in the process. She appears to be making a recovery but her condition is still serious condition at the hospital," he said.

"It's so unfortunate that this transpired but for that second vehicle that was involved, just know that this is a busy intersection, a lot of traffic, a lot of cameras in the area. We just urge you to please contact police as soon as possible," he added.

The intersection is closed in all directions as police investigate.

The area is expected to remain closed for an extended period of time, according to police.

FATAL COLLISION
-Heritage and Steeles #Brampton
-2 pedestrians struck, 1 is deceased
-intersection closed in all directions and will remain so for extended period
-avoid the area
-MCB enroute
-C/R 5:46 AM
-PR22-0391797

One pedestrian is dead and another is in critical condition following a crash in Brampton Friday morning, Peel police say.