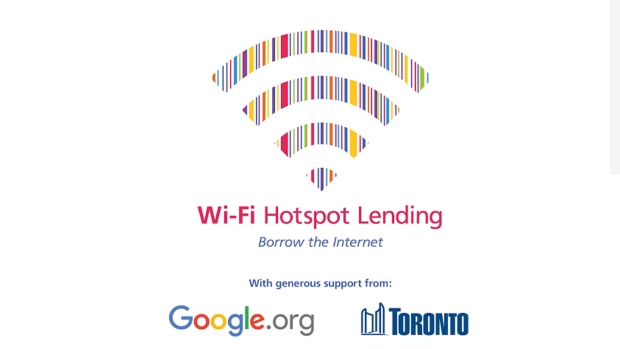 A logo for the WiFi hotspot lending library program is pictured. (Google Canada)

A new initiative aims to make home internet access as easy as borrowing a book for those who live in some of the city’s developing neighbourhoods.

Google Canada is partnering with the Toronto Public Library to create a “WiFi hotspot lending library” that will allow people to borrow a WiFi hotspot connection free for six months.

The pilot project will include six library branches located in neighbourhood improvement areas across the city and will allow borrowers to download up to 10 GB per month.

“WiFi hotspot lending is a simple, effective way to ensure that all Toronto households have access to the internet along with the wealth of education, employment, and community resources that comes with it,” the company said in a statement. “Through this project Google hopes to give some of the most underserved in our city a way to bridge the tech divide.”

The program officially kicks off with an event that will be attended by Mayor John Tory this morning.