Members of Toronto’s Village neighbourhood are calling for the removal of a statue of a figure connected to the dark history of Canada’s residential school system.

The Church-Wellesley Business Improvement Area (BIA) wants the city to help it remove a statue honouring Alexander Wood, which currently stands at the north-west corner of Alexander and Church streets.

In a letter to Mayor John Tory, the BIA noted that Wood was a founding board member, and for many years the treasurer, of “The Society for Converting and Civilizing the Indians and Propagating the Gospel among Destitute Settlers in Upper Canada.”

“They funded the first school that went into one at Sault Sainte Marie. The Shingwauk Residential School came out of that original mission school that was put there, and we don't feel these kinds of symbols are necessary to pay homage to some man who treated the Indigenous people like this,” Christopher Hudspeth, chair of the Church-Wellesley Village BIA told CP24 on Wednesday. 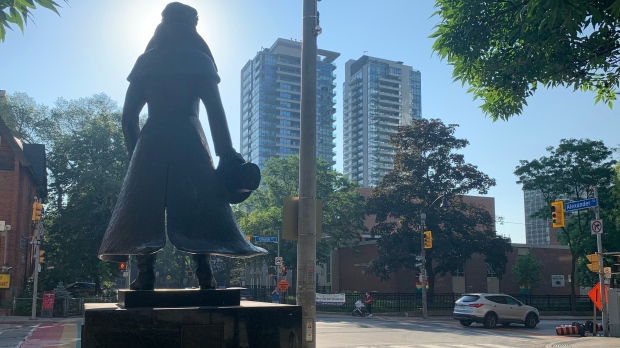 In 2005, the statue was funded and erected by both the BIA and the city to honour Wood as one of the forefathers of the Gay Village area.

However, as new information about Wood has come to light the BIA acknowledges that leaving the statue up would send a message to the 2-Spirit community that racism is being iconized in Toronto.

The calls to remove Wood’s statue come days after a statue of Egerton Ryerson was taken down by demonstrators this past weekend during a rally to remember the 215 Indigenous children whose remains were found buried in B.C. two weeks ago.

Public uproar against the statue ensued last week due to Ryerson being one of the architects of Canada’s residential school system.

Mayor John Tory told CP24 on Wednesday that in the next couple of weeks council will discuss some sort of framework on how to address concerns with street names and statues recognizing historical figures in the city.

“What you can't have, obviously, is just this kind of thing where names pop up and statutes and street names and then we deal with those on a one-by-one basis. We have to have some way of trying to deal with this and decide sort of what the general approach is going to be,” he said.

“And so I think we now have to have a process to examine history and to examine the proper way of dealing with historical reality within the context of how we live in the 21st century,” he added.

Hudspeth said the BIA is committed to addressing racism in The Village by receiving training on anti-Black and anti-Indigenous racism and by October wants to start planning to convert the statue space into a new project done in collaboration with the 2-Spirit community.

Hudspeth said he doesn’t support replacing Wood’s statue with another one as it might perpetuate racism and white supremacy.

“They’re sort of an old symbol and they tend to push things like white supremacy. We don’t see many statues of people of colour in the country, yet we have such a diverse nation. Why not? It doesn’t make sense.”

The Church-Wellesley BIA is calling for the removal of a statue of Alexander Wood. (Beatrice Vaisman)