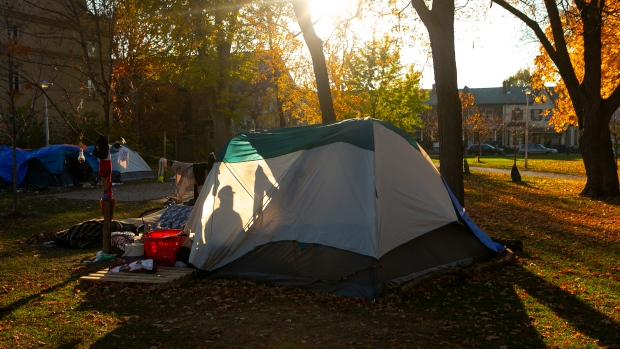 A man is silhouetted in a tent at a homeless encampment in Toronto on Sunday November 8, 2020. THE CANADIAN PRESS/Chris Young

A group of essential workers in Toronto is alleging that their employer is withholding thousands of dollars in pandemic pay.

The group of about 10 employees works out of St. Felix Centre, a 24-hour respite facility in the city’s Liberty Village neighbourhood, for a company called One Community Solutions. The workers support those experiencing homelessness in nearby Parkdale and perform harm reduction services in the area.

The work isn’t without risk, according to one employee who spoke to CTV News Toronto and made the allegation, asking only to be identified as James.

“Crazy things happen every day,” he said. “Outside of the shelter, most of the time there’s tents set up so we patrol those communities and pick up needles and respond to overdoses with naloxone.”

James said he’s seen colleagues pricked by needles, chased away and even attacked by members of the community.

CTV News Toronto spoke with a group of 10 employees from the organization who say the services they offer have become even more difficult to provide.

“It’s really sad,” James said, adding that the prevalence of fentanyl in the area appears to be spreading. “It’s killing a lot of people that we know.”

So in the summer, when the group heard from their boss directly that they would be getting the province’s pandemic pay, they were thrilled.

“We’re expecting a big lump sum soon,” James recalls his boss telling him and his colleagues.

Announced at the end of April, the Ontario government’s pandemic pay for front-line workers saw eligible employees receive $4 more an hour for 16 weeks (April 24 until Aug. 13).

Employees who worked at least 100 hours per month would receive an additional $250 lump-sum payment each month.

James figured he would receive about $3,500 in total, not including the overtime he worked.

This was all great news to James and his colleagues, but weeks went by and his team had still not received the pay.

“We were all super excited and then another month went by and we started really asking about it.”

While there was some initial delay in rolling out the pay increase to the some 350,000 eligible workers across the province, the Ontario government confirmed to CTV News Toronto that it had indeed paid out the allotted funds to the City of Toronto to distribute.

The city also confirms that One Community Solutions has been paid.

“St. Felix has distributed the appropriate level of funding directly to One Community Solutions,” Lyne Kyle, from the City of Toronto, said in an emailed statement on Dec. 4.

“St. Felix has also received confirmation from One Community Solutions that they have likewise paid each of their eligible employees.”

Despite that, James and the nine other employees say they still haven't received the money.

St. Felix said that while they work with One Community Solutions, they are not privy to the contractor’s “internal operations.”

However, a letter subsequently obtained by CTV News Toronto and written today by Tina Haynes, a shift supervisor at St. Felix, confirmed the team had not received their pandemic pay.

“This letter is to clarify that the Community Service Team of the St. Felix have not received their pandemic pay from their employer,” the letter reads. “It has been brought to our attention that he [the employer] received the funds but has not dispersed them to his employees.”

In response to the allegations, One Community Solutions Director Damion Dunston told CTV News Toronto that he does not “really have any comment on it at this point in time.”

“The guys have already been spoken to in regards to pandemic pay in regards to how that’s going to work out,” Dunston said. “For those who don’t want to wait and make something out of nothing, that’s for them to assume. I would never withhold anybody’s payments.”

“Not everybody is qualified for pandemic pay because we do have a large body of employees. For those who will get it, they will be contacted. For those who won’t, they can contact me themselves to find out why they won’t be receiving it,” he added.

James said the whole experience has left him and his team feeling undervalued, but they continue to brave the frontlines because they know how necessary their work is.

“We love it. The financial stuff is pretty ridiculous. But we keep working because we love the people.”