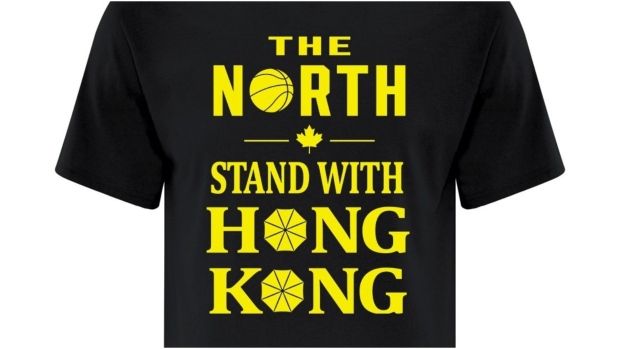 The image of a pro-Hong Kong T-shirt is seen here in this photo. An advocacy group plans to hand out thousands of these shirts at the Toronto Raptors' home opener on Oct. 22. (Torontonian HongKongers Action Group)

A group is planning to show their support for Hong Kong protesters by handing out pro-democracy T-shirts at the Toronto Raptors' season opener next week.

The group says they have raised more than $34,000 from their Go Fund Me campaign to fund the production of the T-shirts. It surpassed their original goal of 28,000.

The group says they are aiming to cover 35 per cent of Scotiabank Arena, where the Raptors will start their season against the New Orleans Pelicans. The team will raised their first championship banner before the game.

The campaign is the latest action by local pro-democracy groups to show solidarity with protesters. Several rallies have been held in the city and across Canada over the past few months condemning the actions of the Hong Kong and Chinese governments.

The ongoing demonstrations began in June to protest a controversial extradition bill, which has been withdrawn last month. However, following months of unrest, protesters have expanded their demands which include inquiry into police brutality as well as restoring direct elections for the region’s leader.

"We would like to give away some “The North Stand With Hong Kong” T-Shirts to the Raptors fans to show the world that we share the same values, and we stand with Hong Kong," the group stated in their Go Fund Me page.

On Oct. 4, Morey tweeted in support of the protests, but later deleted the tweet after backlash from Rockets’ owner Tilman Fertitta and the Chinese government.

Several NBA events and exhibition games in China were cancelled following the tweet.

More than a week later, NBA superstar LeBron James added fuel to the fire by saying Morey’s tweet was "misinformed", to the displeasure of protesters in Hong Kong and the world over.

On Thursday, Silver also revealed that China asked for Morey to be fired. However, the league declined saying they will support Morey’s freedom of expression.

The Raptors organization is not involved in the giveaway and the league has not officially endorsed the campaign.

CP24 has reached out to the Toronto Raptors for comment.

-with files from the Associated Press