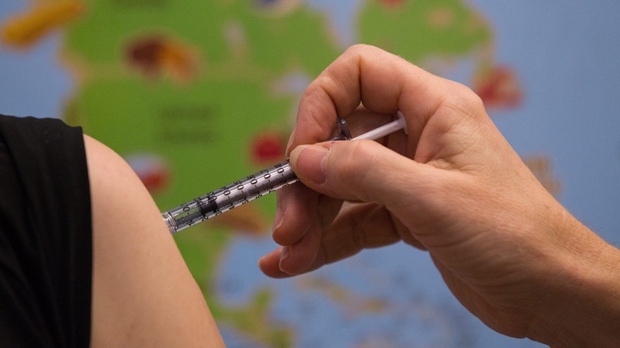 A woman receives a shot at DrugSmart pharmacy at Queen's University in Kingston, Ont., on Monday Feb. 1, 2016. THE CANADIAN PRESS IMAGES/Lars Hagberg

TORONTO - A group that includes five Ontario mothers is challenging the province's child vaccination law, alleging it violates a number of constitutional rights.

The parents and the non-profit organization Vaccine Choice Canada allege the Immunization of School Pupils Act breaches the rights to freedom of conscience and religion and to liberty and security of the person, among others.

The law states that parents must ensure their children are vaccinated against a certain list of diseases unless they obtain a medical exemption.

Parents can also obtain an exemption if they sign a statement of conscience or religious belief, but as of 2017, they must first attend an information session on vaccination.

Under the law, children whose parents do not comply can be suspended from school on order from a medical officer of health.

The allegations have not been tested in court and the province has not yet filed a statement of defence, but a spokeswoman for Health Minister Christine Elliott said the government is committed to ensuring a strong and effective immunization system.

“The Ministry of Health is continually evaluating the best available evidence to improve the uptake of vaccines, reduce risk of disease outbreaks and achieve better health for all Ontarians,” Hayley Chazan said in an email.

“We're unable to comment further as this case is currently before the courts.”

The group behind the challenge includes mothers who each have between two and five children, some of whom they allege have been barred from school due to their lack of vaccination.

One of the women, Amanda Moses, says two of her five children have experienced severe reactions to vaccines, prompting her to refuse vaccinations for the others.

Another, Theresa Jay Jean Flynn, says her children have been refused enrolment in school after she declined to sign the statement of conscience or religious belief.

In its statement of claim, the group alleges forcing parents to sign the document amounts to compelled speech and violates their rights by “posing a potential criminal liability.”

They particularly object to a part of the document that lists the dangers of not being vaccinated and tells parents that by signing, they are accepting responsibility for putting their child's “health and even life at risk.”

The group also alleges the information sessions parents are required to attend if they seek an exemption on conscientious grounds “present a one-sided, distorted view of vaccination, without any information on the risks of vaccination to allow for an informed consent and basis to choose.”

It further alleges that students who line up in school to receive vaccines are not told of the risks or screened for the “potential propensity to be injured by vaccines,” contrasting that with the care taken to accommodate deadly food allergies.

“While schools have taken saturated and heightened steps to make their spaces 'nut-free,' the risks of vaccines to children, particularly those who are predisposed to injury and death from them, are completely ignored,” the statement of claim reads.

The group, which is planning a rally at the Ontario legislature Tuesday, also says the threat of suspension, expulsion or refusal to enrol children whose parents don't comply violates children's right to education.

This report by The Canadian Press was originally published on Oct. 28, 2019.