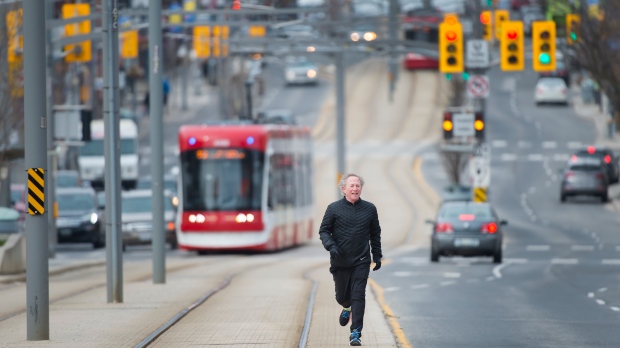 Lloyd Alter was running on a Toronto sidewalk recently when he stepped into a busy street without thinking to avoid a woman pushing a baby stroller.

Realizing later how easily he could have been struck by a car, Alter has started running on the city's streetcar tracks, saying the wide expanse of the tracks that stretch about three metres across are “quite a lifesaver right now.”

Alter, a professor of interior design at Ryerson University and a design editor at TreeHugger.com, doesn't advise the practice for others.

But like so many Canadians, Alter is frustrated by the lack of space to move amid the COVID-19 lockdown.

“Joggers have become sort of the new cyclists. It used to be 'We hate the bicyclists, get them out of the way, they're on the sidewalks,' and now it's 'We hate the joggers.' When in fact, we're all just fighting over crumbs when the whole loaf goes to the drivers.”

Calls from stir-crazy Canadians have been growing both to reopen parks and close city streets to cars to increase space to move while maintaining safe physical distancing.

In Ottawa, the National Capital Commission (NCC) announced Friday that it's closing a stretch of the Queen Elizabeth Driveway between 8 a.m. and 8 p.m. daily. The pilot project began Saturday and runs through April 26.

In Vancouver, Stanley Park closed its roads to vehicles last week in an effort to aid physical distancing.

Countless studies have shown the mental health benefits from fresh air and exercise, but many argue that current health directives are unclear. Sidewalks are clogged and many parks are off-limits. Two Ottawa residents are among Canadians recently ticketed for walking in parks.

“The way I look at this is that it's a bit of a pressure-cooker,” said Mazumder, who's doing his PhD studies on the psychological impacts of urban design. “Maybe I'm being a pessimist with this, but I'm worried that people are just going to snap at some point.”

He cited several studies including the Attention Restoration Theory developed by psychologists Rachel and Stephen Kaplan, which found that exposure to nature improves focus and ability to concentrate.

The Japanese, who are big believers in the restorative elements of nature - the sights, smells and sounds of the forest - practise forest bathing, or “shinrin-yoku,” which is literally experiencing the woods through the senses to de-stress.

Ottawa resident Sylvie Bigras applauded Friday's move to open the Queen Elizabeth Driveway. Bigras, who was Canada's press chief at several Olympic Games in her long career in sports, had been cross-country skiing daily in nearby Gatineau Park before the NCC closed the park that covers 361 square kilometres late last month.

“I was skiing and thinking, 'Oh my god, this is so incredible,' and then to have the NCC arbitrarily shut access to Gatineau Park, no more skiing, when this is so incredibly necessary and so helpful to our mental health and physical health, right?” said Bigras. “It's such a perfect package of health.”

Bigras is going for daily bike rides now instead.

“I've just been really angry about (lack of park access), not in the placard-waving-in-front-of-the-mayor's-office way, but just thinking 'Oh, come on,”' she said, exasperated. “Working with athletes my whole life, I understand the importance of being physically active, and I know how much of an impact it has on me personally. If I don't get out for my daily bike ride, my son says, 'OK, you're getting grumpy, go outside and play.”'

Diana Brecher, a clinical psychologist and Ryerson professor, said the combination of fresh air, exercise and nature is key to our wellbeing.

“Walking in downtown Toronto only really gets you the fresh air component, not much green space,” she said. “We are part of the animal kingdom, we need to be in nature. If you think about when people go on holiday to beautiful, natural spots. It's very refreshing and rejuvenating.”

With people glued right now to their phones, computers and TV screens, Brecher said taking a fresh air break is even more important.

“We're not designed to be sitting all day,” said Brecher, who schedules 90 minutes of walking a day around her neighbourhood.

But it's not easy in this new normal, she added, where even “going to the grocery store used to be a thoughtless exercise and now is a very intentional, strategic plan to survive it.”

Mazumder bobbed and weaved his way through people while out on a recent run in Edmonton, and the urban neuroscientist was stunned at how clogged the city's sidewalks were.

“By not giving people adequate space to get out of their houses and use sidewalks we're basically making people choose between the risk they're exposing to others, the risk that they're exposed to, and the risk of being hit by a car. And it just seemed kind of ridiculous to me,” he said.

Edmonton planned to shut down part of Victoria Park Road to cars on Saturday to help connect people to the river valley. Next weekend, the city plans to expand pedestrian and bike space on Saskatchewan Drive.

Mazumder said the Edmonton street closures, however, will benefit mostly people in affluent neighbourhoods, who likely already have big backyards and decent access to other green space.

“Feeling claustrophobic during a pandemic, the impact on people varies with class and income,” he said. “Being cooped up in a house with a big backyard is stressful. But if you're in an apartment, and you don't have access to any private outdoor space, you rely on the parks and getting out of the house to keep yourself sane.

“So it's thinking about, how do we do this in an equitable manner to make sure everybody in every community has access? Otherwise, the disparity (between the rich and poor) in mental and physical health that we see is going to continue to expand.”

Mazumder argued that opening roads should be widespread both to prevent large groups from congregating - think of the crowds that flock to a street festival - and to ensure that everyone is within a five-minute walk from open space.

With tickets being issued in parks, Mazumder also worries about racial profiling.

“That's an added element to this whole thing, especially somewhere like Toronto, which has its history with racial profiling and carding, on a good day, this is a huge problem.”

This report by The Canadian Press was first published April 18, 2020.