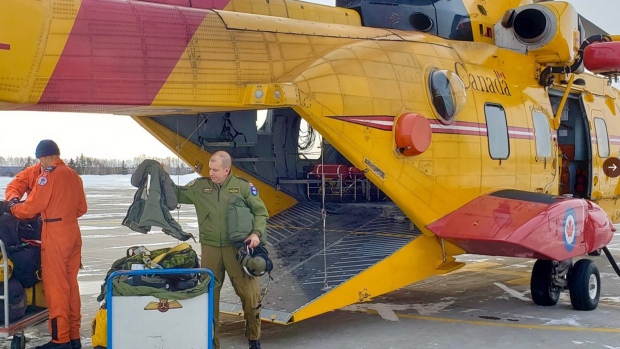 The crew of a Cormorant helicopter prepares to fly to St. John's to assist with rescue operations from Gander, Newfoundland on Jan. 19, 2020. (Joint Task Force Atlantic/DND)

OTTAWA -- Canada's top soldier is warning that as the Army gets called out to a growing number of floods, wildfires and other natural disasters, there is a risk that work will hurt the force's ability to defend the country.

The Canadian Armed Forces has a long history of helping provinces and municipalities with natural disasters, with soldiers filling sandbags, evacuating citizens and fighting fires, among other things. Recent trends suggest those requests are growing in both frequency and scope.

An analysis by The Canadian Press last May showed the military had been asked to help with 10 weather-related disasters over the previous two years. That's compared to 20 such calls between 2007 and 2016. The number of soldiers involved has also increased as the size of the disasters has grown.

While those efforts have been warmly welcomed by residents and local governments, Canadian Army commander Lt.-Gen. Wayne Eyre said in an interview last month: “I can conceive, if this becomes of a larger scale, more frequent basis, it will start to affect our readiness.”

The Canadian Forces over the weekend deployed 300 troops to help St. John's, N.L., dig out after a massive snowstorm walloped the city, the latest disaster for which the military has been called out to help. Another 125 soldiers are expected to arrive by Tuesday.

Readiness is the term militaries use to describe their ability to do their jobs at a given moment. For the Army, that means being ready to fight. That might not seem important during a time of relative peace, and Eyre says: “When the people of Canada call, we are there.”

But training for war is essential to ensure the Army can respond whenever and wherever a threat to the country emerges.

“It's like a hockey team that would never train, never play on the ice together, and then all of a sudden being thrown into an NHL game and be expected to win,” said Eyre. “You've got to keep doing that (training).”

Training has not been affected to a significant degree yet, but Eyre says commanders are “watching closely.” The concern is that disasters often occur in the spring and fall, which are also the Army's primary training periods.

The Liberal government's defence policy, unveiled in June 2017, set aside money specifically for brigade-level training, which involves bringing together thousands of soldiers as well as artillery, armoured vehicles and aircraft to simulate a large-scale military operation.

Exercise Maple Resolve, as the brigade-level training is called, is conducted at Canadian Forces Base Wainwright in Alberta in May. That was around the same time last year as more than 2,000 military personnel were helping with floods in Ontario, Quebec and New Brunswick.

“I'm not too worried if we missed it for a year or two,” Eyre said. “But if we missed it, that type of training, for a significant period of time, the cost down the road is where we would pay it.”

The military is the force of last resort when it comes to natural disasters, called upon when municipalities and provinces are unable to cope on their own. However, while some new training, such as the basics of fighting wildfires, has been added, disasters are not the Army's primary focus.

There are many countries where the military is the first responder when it comes to everything from natural disasters to civil unrest. And Eyre says one of the main benefits of the Canadian Armed Forces to the country is its ability to respond quickly - and in a self-sustaining manner, not placing demands on limited local resources - when called upon in emergencies.

However, he worried putting too much emphasis on disaster response could hurt the Army's ability to fight, which would ultimately hurt Canada.

“That's very dangerous. If we become focused on solely humanitarian-assistance, disaster response, when the country really needs us, when the stakes are very high and we have to fight and we're not ready, that's going to cause casualties and it's going to cost loss of national interest.”