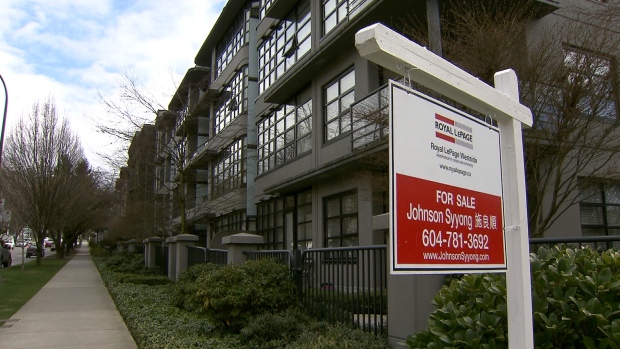 TORONTO -- Home sales in Toronto and the surrounding area fell to a 10-year low in 2018, as the number of new listings hitting the market declined and homebuyers and sellers grappled with a new reality of higher interest rates and stricter mortgage rules.

The Toronto Real Estate Board says there were 77,426 residential transactions recorded through its Multiple Listing Service (MLS) system last year, down 16.1 per cent from 92,263 sales in 2017.

The last time sales were lower than this level was in 2008.

Meanwhile, the average sale price of all properties -- detached, semi-detached, townhouse and condominiums -- fell by 4.3 per cent to $787,300.

TREB says home prices were up slightly in Toronto but lower in the suburbs as the price of condos -- which make up a large segment of the urban market -- climbed 7.8 per cent year over year.

"After spiking in 2017, new listings receded markedly in 2018. In many neighbourhoods, despite fewer sales from a historic perspective, some buyers still struggled to find a home meeting their needs," said Jason Mercer, TREB's Director of Market Analysis and Service Channels in a statement.

"The result was a resumption of a moderate year-over-year pace of home price growth in the second half of the year. Price growth was strongest for less expensive home types, as many homebuyers sought more affordable home ownership options."

The board says there was also marked improvement in sales and prices in the second half of the year.

"The worst is behind us," said Tim Syrianos, broker and owner of Re/Max Ultimate Realty in Toronto.

"What happened last year was a combination of many things, such as a lot of different policies that came into effect at the same time which put a lot of buyers and sellers on the side lines for quite some time. Every indication we have here is that things will be better (in 2019)."

Syrianos, who has worked in real estate for three decades, said the pace of price growth and sales seen in 2017 was unsustainable, and what will likely result this year is a more balanced market, with supply continuing to be a challenge.

"I see it being a more steady marketplace, with more consumers looking at their options and accepting the new normal of the new lending rules and trying to figure out a way to enter the marketplace," he said.

Realtor John Pasalis said the mortgage stress test, which came into effect Jan. 1, 2018, helped get rid of the "froth" in the market, which had largely been supported by speculators.

"It brought us back to a sort of a more balanced level, a level where demand is closer to true end-user demand rather than a market driven by investors which was where we were for the past three years," said Pasalis of Realosophy Realty.

In Toronto, the average price for a detached home last month was down eight per cent year over year to $1.14 million, and down 2.2 per cent to $891,095 in the surrounding areas.

Other property types -- semi-detached, townhouse and condo apartments -- all saw price increases ranging from 3.2 to 9.9 per cent in December in both Toronto and the GTA.