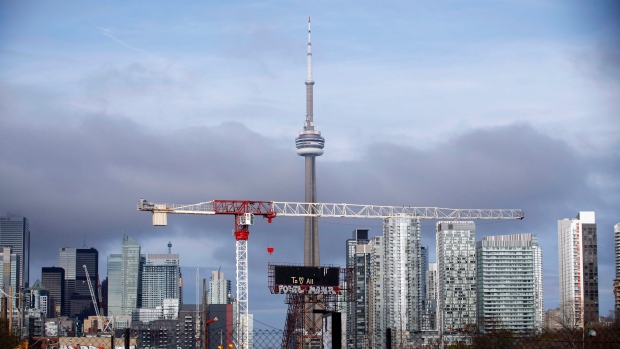 GTA rent prices rose by “the fastest pace on record” in the second quarter of this year with the average one-bedroom unit being leased out for nearly $2,200 a month, a new report has found.

Urbanation Inc. say that rent prices rose for the fifth consecutive quarter due, in part, to “near record-low unemployment, and a sharp reduction in home purchasing power as interest rates increased.”

The market research firm says that average condo rents in the GTA were up 5.9 per cent from the first quarter of 2022 and 16.7 per cent year-over-year.

Urbanation says that vacancy rates in the GTA also plummeted, dropping from 5.1 per cent one year ago to 1.4 per cent today.

“Driving that growth is really just demand and supply moving in the opposite direction. On the demand side we have seen a reacceleration in population growth, we have a near record low unemployment rate and also a very strong deterioration in home ownership affordability with prices remaining near record highs, interest rates rising very quickly and a lot of first time buyers being shut out of the market,” Urbanation President Shaun Hildebrand told CTV News Channel on Tuesday. “So there has been a confluence of factors that have boosted demand at a time when supply just isn’t keeping pace. In fact, in the second quarter we recorded the lowest number of rental construction starts in the GTA that we have seen since we started tracking the data back in 2015.” 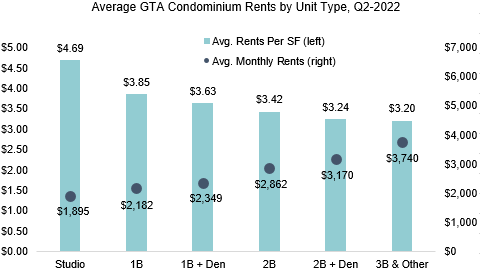 Toronto rent prices dropped by up to 24 per cent at the outset of the pandemic, as many resident fled small downtown units in search of more space further from the core.

The latest data, however, suggests that Toronto rent prices are now approaching their pre-pandemic level across most property types.

Studio apartment rent prices are still down about one per cent from the second quarter of 2019 but units with dens saw gains of between 6.4 per cent and 9.4 per cent over the same time period.

Urbanation says that condo rental inventory also dropped to a record low of a third of a month’s supply in the second quarter, which could foreshadow further increases in the cost of rent particularly in the core.

“During the first year of the pandemic a lot of people were fleeing their small units in the downtown area as working from home became more common. So those rents dropped very quickly. But with offices reopening, entertainment venues reopening, schools reverting back to in-class learning and just high commuting costs in general we have seen demand for the core outstrip demand for the 905 for the first quarter since the pandemic began,” Hildebrand told CTV News Channel. “With that we have seen demand for small units really skyrocket.”