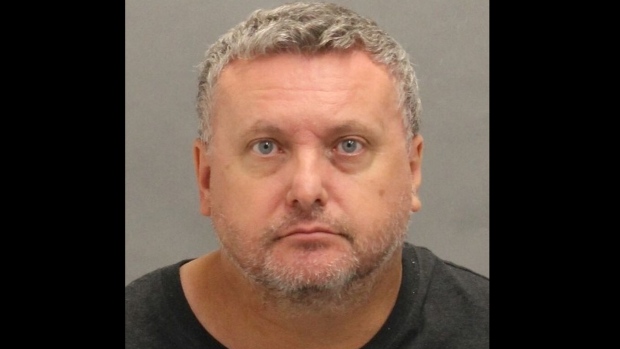 Craig McCourt, 51, is shown in a Toronto police handout image.

A long-time security supervisor at Toronto's Eaton Centre mall has been charged with possession of child pornography, and police allege he watched and filmed children at the mall while on the job.

Toronto police say that on Aug. 12, officers searched a home in the area of Bayview and Moore avenues in Leaside as part of a child pornography investigation.

They allegedly found "child sexual abuse material" inside the home.

He is scheduled to appear in court at Old City Hall on Oct. 23.

Investigators say McCourt worked as a security supervisor at the Eaton Centre mall for more than 15 years.

They allege that while on the job, he took pictures of children in the mall.

His image was released to the public on Friday.

Through a spokesperson, Eaton Centre operator Cadillac Fairview said they are cooperating fully with the investigation.

"We can confirm that Craig McCourt was employed as a security supervisor, however, due to the ongoing criminal investigation and case, we are unable to provide additional details," the company said Friday. "We are taking this matter very seriously and are fully cooperating with the police investigation. While the investigation is ongoing, we have taken the additional step to legally ban the individual from entering any Cadillac Fairview property."