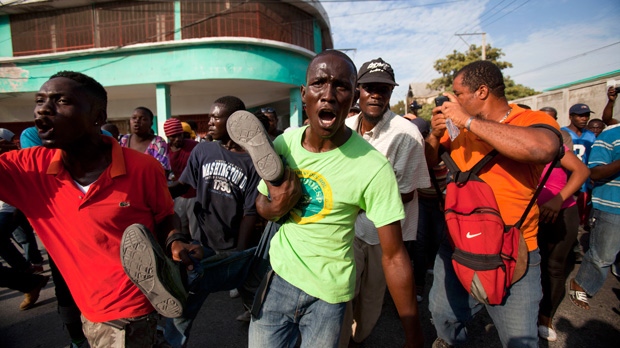 Anti-government protesters carry the body of a demonstrator who was shot to death during clashes with the National Police in Port-au-Prince, Haiti, Saturday, Dec. 13, 2014. Haiti's capital has endured a growing number of violent demonstrations in which protesters are demanding long-delayed elections and the resignations of Prime Minister Laurent Lamothe as well as President Michel Martelly. (AP Photo/Dieu Nalio Chery)

PORT-AU-PRINCE, Haiti -- In the wake of violent anti-government protests and a commission's call for his resignation, Prime Minister Laurent Lamothe said Saturday that he would address the nation to make an announcement.

Lamothe's statement, made via his Twitter account, did not indicate whether he would leave office, but it came just hours after President Michel Martelly said he accepted the findings of the commission, which he appointed to break Haiti's political stalemate.

Government officials said late Saturday that Lamothe would be delivering his speech within minutes, but more than two hours passed with no announcement.

Haiti's capital has endured a growing number of violent demonstrations in which protesters are demanding long-delayed elections and the resignations of Lamothe as well as Martelly.

On Saturday, one man died in a protest in Port-Au-Prince during clashes with police who were firing tear gas. It was not immediately clear how the man died, although he was shot at least once in the wrist. U.N. troops were not present at Saturday's protest. The demonstrations also spread to other towns, including Gonaives and Cap-Haitien.

The unrest followed a demonstration Friday in which U.N. peacekeeping troops opened fire on a crowd that marched through Port-au-Prince, set tires on fire and skirmished with troops and police.

The U.N. peacekeeping mission in Haiti said it will investigate allegations its troops used excessive force in the Friday clash. The U.N. body said in a statement it is taking the allegations very seriously.

"(We) immediately opened an investigation to establish the facts," officials said.

Martelly has been under increasing pressure to call elections, which have been expected since 2011. His administration blames the delay on six opposition senators who contend legislation that would authorize the vote is unconstitutional and unfairly favours the government.

The commission set up to break the impasse recommended that Lamothe resign, along with the head of the Supreme Court and current members of Haiti's Provisional Electoral Council. It also called for the release of several "political prisoners."

Speaking to the nation late Friday, Martelly said he accepted the commission's findings and that Lamothe was prepared to make a sacrifice and resign. Lamothe was at the announcement but did not speak.

Martelly said he would meet Monday with government officials to discuss the commission's report.

Administration officials have insisted the government wants to hold the elections. The terms of 10 senators expire in mid-January and Parliament will be dissolved, meaning Martelly would rule by decree.