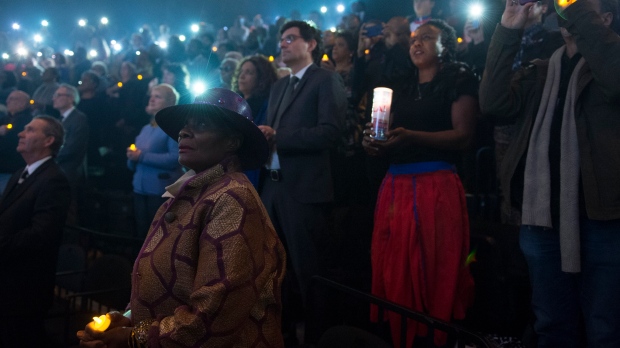 People observe a moment of silence during an event to commemorate the ten year anniversary of the Haiti quake, in Montreal, Sunday, Jan. 12, 2020. THE CANADIAN PRESS/Graham Hughes

MONTREAL - Gael Stephenson Chancy remembers the time following the earthquake that struck Haiti ten years ago as the moment he was forced to grow up.

As his family rode in a transport towards the military plane that would carry his family to Canada, the then-12-year-old looked out the window and saw horrific sights.

“They had piled up the bodies of the dead next to the wounded as the rescue teams were trying to hide the wounded,” he said in an interview.

“I remember the adults in my family telling me to hide the eyes of my younger cousins, and I remember thinking, 'Why wouldn't I hide my own eyes?”'

Chancy was one of the many Haitian-Canadians across the country who on Sunday marked the 10th anniversary of the catastrophic earthquake that devastated their mother country.

In a Montreal theatre usually used for circus performances, a crowd in the stands stood holding electronic candles during a moment of silence that gave way to thunderous drumming at exactly 4:53 p.m. - the moment the earthquake struck on Jan. 12, 2010.

Marjorie Villefranche, the director of the Maison d'Haiti community organization, said the sense of loss is still “very vivid” in Montreal's Haitian community.

“Every time we talk about the earthquake everybody starts crying again, so the trauma is still there,” she said. “Probably it will be for another 10 years, we don't know.”

The Maison d'Haiti, which helped organize the ceremony, held a weekend of discussions, presentations and artistic performances to mark the anniversary of the tragedy.

Villefranche said it's important to remember the dead but also the living, who continue to grapple with the aftermath of the disaster.

Laurence Magloire, a Haitian filmmaker who has spent much of her life Canada, said she was at home editing footage when her house outside Port-au-Prince began shaking, hard enough to throw her to the ground.

With a sense of foreboding, she went out in the street.

Prime Minister Justin Trudeau offered condolences on Sunday to the loved ones of the victims, including 58 Canadians.

“Over the last decade, the Haitian people have shown incredible resilience in the face of challenges and obstacles, as they continue to work toward a better tomorrow,” he said in a statement.

“As steadfast partners and friends, Canada remains committed in our support for the Haitian people.”

There were more than 165,000 people of Haitian origin living in Canada according to the 2016 census, the vast majority of them in Quebec.

But despite the international aid that poured into Haiti following the earthquake, Magloire said life in Haiti remains difficult.

“We had hope to change things, to build it better,” she said. “But no, all this money is gone because the politicians, the government, they're not there to make the country work.”

Stephenson Chancy remembers his first interview after landing in Canada, when he solemnly told reporters his generation would take responsibility for rebuilding Haiti.

“I'm not sure what I thought I could do at 12 years old for reconstruction,” he said, smiling a little. “I really felt a sense of responsibility. I think it was just a natural instinct to being powerless toward nature.”

Now, he's doing his best to help. He works for the Maison d'Haiti, where he helps with youth programming and welcoming new refugees to Canada.

He's also become involved in working with an orphanage back in Haiti, which he said was completely rebuilt with money from international donations. It's an example of how aid can work, he said, if the parties listen to those on the ground and work together.

He said he understands the frustration that more hasn't been accomplished, but gets angry when he hears people say there's no point in trying.

“I think of all the people who are still there because they have no choice but to live those conditions,” he said. “Maybe I'm demanding, but I think we have a duty to help them.”

Haitian earthquake survivor Laurence Magloire poses outside of an event to commemorate the ten year anniversary of the Haiti quake, in Montreal, Sunday, Jan. 12, 2020. THE CANADIAN PRESS/Graham Hughes

Haitian earthquake survivor Gael Stephenson-Chancy poses outside of an event to commemorate the ten year anniversary of the Haiti quake, in Montreal, Sunday, Jan. 12, 2020. THE CANADIAN PRESS/Graham Hughes