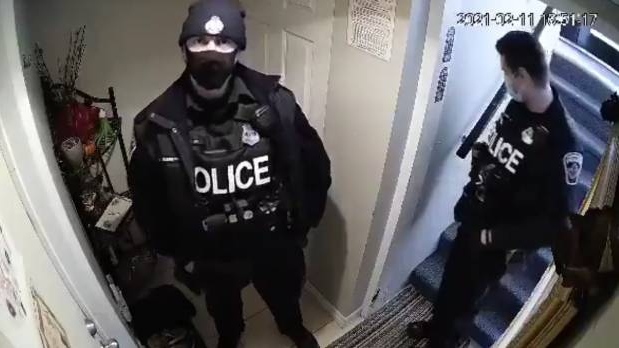 A Hamilton police officer who allegedly lunged at a woman while responding to a reported dispute between a landlord and their tenant is shown in this image taken from a video posted to social media. (Twitter)

A Hamilton police officer has been charged with assault after a video surfaced which appears to show him lunging at a woman while responding to a reported dispute between a landlord and their tenant.

Police say that the incident happened in the area of King Street East and Sherman Avenue on Feb. 11 and was captured by a camera outside the woman’s apartment.

In the video, which was widely circulated on social media, the officer appears to point out the camera to a colleague before knocking on the door to speak with the woman.

The woman then opens the door slightly and explains to the officer that her landlord was trying to use renovations as a means to evict her and had repeatedly called police to the residence.

The officer then interjects to accuse the woman of damaging the landlord’s property.

When the woman replies that she has not damaged any property, the officer begins to speak over her.

“I will just speak over you because clearly you are unreasonable and don’t listen,” he is heard saying in a raised voice. “If you damage his property you are going to be arrested so do not damage anything. Is that clear?”

This is #HamOnt. This is why we say @DefundHPS. Notice how she never raises her voice, yet he accuses her of being "unreasonable" and not listening, while repeatedly talking over her and threatening her with arrest for property damage that never happened. Then he lunges at her pic.twitter.com/rm3qtPlenm

Following the warning, the woman indicated that she understood and the officer began to walk away.

But the woman then opened the door and said “enjoy your bullying of a position.”

That is when the officer appears to turn around and lunge at the woman as she slams the door shut.

He is then heard laughing as he walks out of the building with another officer.

Hamilton police also indicated that they would conduct a full investigation.

In a news release issued on Thursday, police said that investigation has now resulted in Constable Ian Millburn being charged with Assault Level One.

Police say that Millburn has been placed on administrative duties pending the conclusion of the legal proceedings “and will have no contact with the public.”