Handguns seized after Porsche flips during police chase in Pickering 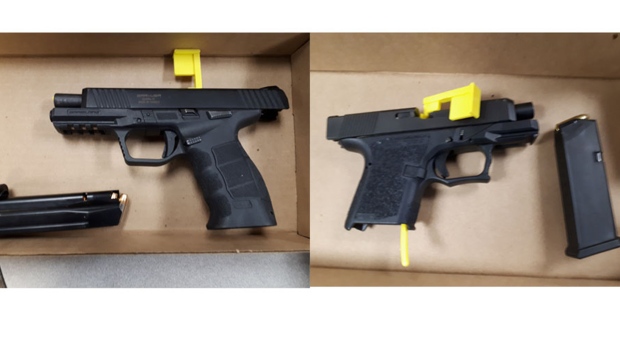 Loaded handguns seized after a police chase in Durham Region are shown in an undated handout image. (DRPS)

Two people have been charged after two handguns were allegedly found in their possession following a police-involved chase in Pickering, Ont.

According to Durham Regional Police (DRPS), a traffic officer patrolling the area of Whites Road and Highway 401 saw a black Porsche travelling in a “dangerous manner.”

The officer tried to stop the vehicle but quickly gave up the chase as it posed a risk to public safety, investigators added.

The vehicle was eventually found with the assistance of the DRPS helicopter, Air1. Police say the suspect continued to “drive erratically” as it exited the highway near Westney Road.

The driver continued to try and evade officers when confronted near Toy Avenue, police said, eventually jumping a curb, which causing the vehicle to flip.

Police say that both occupants, who were not injured in the incident, were in possession of loaded semi-automatic handguns. They were both taken into custody.

Scarborough resident Rychez Leslie, 21, is facing numerous charges including dangerous operation of a vehicle, flight from a peace officer, and possession of a loaded firearm. The suspect has also been charged under the Highway Traffic Act.

A second suspect, identified as 19-year-old Owais Jarafi, is facing numerous firearm-related charges, including occupying a motor vehicle with a firearm and possession of a loaded restricted or prohibited firearm.

Both suspects were held for a bail hearing, police said. The charges have not been proven in court.