Harper met by demonstrators at election campaign rally in Montreal 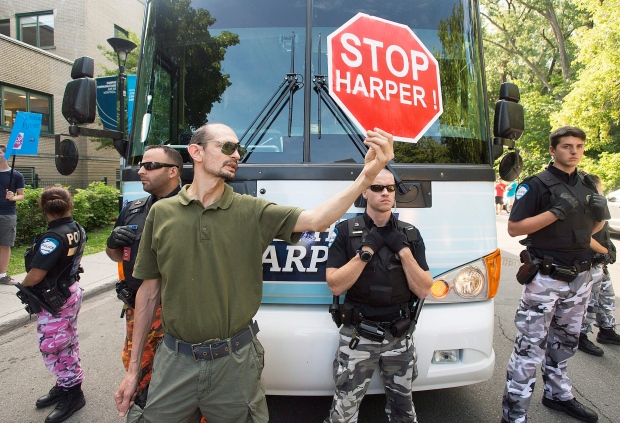 MONTREAL -- Stephen Harper launched his quest for re-election inside a Montreal hall by boasting how the values of his Conservative Party mesh with those of Quebecers.

His speech to a room of cheering supporters stood in contrast to the scene outside, where demonstrators slapped anti-Harper stickers on a Tory campaign bus and one man was arrested for uttering threats.

Another shouting protester entered the building but was tackled and hauled out before Harper took the podium.

Harper chose to kick off his campaign with the rally in the riding of Mount Royal -- a seat once held by former prime minister Pierre Elliott Trudeau, the late father of Liberal Leader Justin Trudeau.

The Conservatives haven't won a Montreal seat in a quarter-century and have long coveted the riding as a possible beachhead in Canada's second-largest city.

The Harper Tories have also struggled to make a breakthrough in Quebec and only captured five seats in the province in 2011.