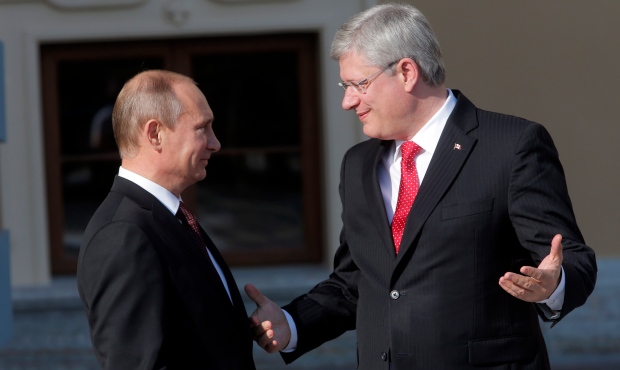 ST. PETERSBURG, Russia -- Prime Minister Stephen Harper is taking a firm position on two controversial issues at this year's G20 summit, with little hope of achieving a wider consensus with his fellow leaders on either front.

With two cabinet ministers in tow to hammer home his messages, Harper made it clear that a military strike is necessary against Syria; and that countries should be setting hard targets for reducing their debts, as Canada is now doing.

On Syria, an issue on everyone's lips though not on the summit agenda, Foreign Affairs Minister John Baird said Thursday there was little prospect of common ground with all G20 nations. That's despite the addition of a meeting of approximately nine foreign ministers this week.

"We've got to be very realistic. Nobody is coming here anticipating success. This is fundamentally an economic forum," said Baird, who met with counterparts from France and Australia.

"Obviously when you have this type of crisis, with the significant use of chemical weapons in recent weeks, there's no doubt that casts a shadow. ...

"What we hoped to have was a good dialogue on these issues. But certainly I and the prime minister were realistic that at this forum we weren't likely to come to a conclusion."

Russian President Vladimir Putin's press secretary said earlier in the day that his country still did not feel there was credible evidence that the regime of Bashar Assad had used chemical weapons against its own people. Putin views any military action without UN sanction a violation of international law.

Baird and Harper have had sharp words for Russia over several months, decrying its support for Assad and its blocking of stronger action at the United Nations.

Putin greeted Harper with a polite handshake outside of the sprawling Constantine Palace as the prime minister arrived for the start of the G20 meetings. But there was no lingering chit-chat, nor was there between Putin and U.S. President Barack Obama or French President Francois Hollande -- all leaders who support a military strike against Syria.

On global economics -- Harper's preferred topic -- the prime minister has taken an equally hard line on the need for countries to rein in spending and set firm targets for reducing debt.

The Conservative government is promising a debt-to-GDP ratio of 25 per cent by 2021. A year ago, the Finance Department forecast a ratio of 23.8 per cent by 2020-21 in a report on the aging population.

Flaherty framed the debt-to-GDP ratio target as a question of balance, rather than austerity.

"We are spending money on job creation and on job training, very substantial long-term infrastructure projects, so that's one part of the balance," Flaherty said.

"The other part of the balance is making sure you're back to balanced budgets, and addressing the debt-to-GDP ratio in the medium term."

How countries can find that balance, as some struggle with staggering unemployment rates, is one of the dilemmas facing the G20.

But on this front too, Canada can't count on broad support.

When finance ministers and central bankers met in July, they agreed to bolster growth before turning their attention to lowering deficits and debt burdens. Ironically, Putin is one of the few other voices in favour of stronger action on fiscal consolidation.

"A common understanding of the necessity to find an optimal balance between fiscal consolidation and support of growth has emerged in hot discussions," Putin said Thursday.

Back in Canada, the opposition was unimpressed with Harper's promise of debt reduction. Liberal deputy leader Ralph Goodale said the largest debt reduction came between 1993 and 2005, when his party slashed the debt in half from nearly 70 per cent of GDP.

Goodale said Harper got rid of contingency reserves and increased spending to such an extent that Canada lost its cushion for weathering the recession in 2008.

"It's fine to use his bully pulpit to go out and preach, but the sermon doesn't ring true from this particular preacher because he has not delivered on his own goals and commitments to Canadians," Goodale said in an interview.

In St. Petersburg, world leaders weren't the only ones weighing in on how to nurture economic growth. Representatives from civil society and the private sector also provided input.

Farah Mohamed, president and CEO of the (G)irls 20 Summit and an official civil-society representative at the G20, said slashing social programs to keep deficits down will catch up with a country.

Her group would like to see governments provide more support for women entrepreneurs, and empower women and girls through their economic policies in diverse areas such as agriculture and mining.

"That's going to have to come from somewhere, and it's usually from the social profit side, the NGOs that are delivering services," said Mohamed.

"If you cut and cut and cut, at some point society will suffer for that, whether it's in education, health care, social benefits -- there are a whole bunch of factors that have to be managed when you're trying to reduce your deficit."