Has Ontario election campaign turned into a race for second? 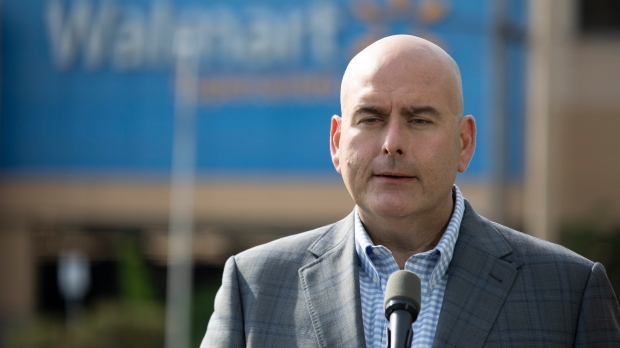 Ontario Liberal Leader Steven Del Duca makes an announcement outside a big box store in Toronto on Wednesday, May 25, 2022. THE CANADIAN PRESS/Chris Young

There is a week of campaigning left before voters in Ontario head to the polls and it feels more and more like the real race is for second place.

In most polls the Liberal party is in second and the NDP third. But on election night the popular vote isn’t what matters, it’s the seat count and with the splits between the parties anything can happen on that front.

It’s worth noting that the Green party got a bump in the polls from the debate performance of its leader Mike Schreiner. In close ridings, an increase in Green voters could affect how the other parties fare. Another factor to watch is how the two parties to the right of the Progressive Conservatives fare. The New Blue Ontario Party and the Ontario Party might siphon off traditional PC voters. In a few ridings it might be enough to put PC seats at risk.

On Wednesday, NDP Leader Andrea Horwath made the point that while the polls show Ford with a comfortable lead, they also show that six out of 10 voters in the province do not support re-electing the Tories. Horwath called out the cuts made by the Ford government over the last four years and then she reminded voters that past Liberal governments proved they cannot be relied on.

The NDP need to hold onto the votes, and the 40 seats, won in 2018. The Liberal resurgence will put some NDP seats at risk. The NDP began the campaign targeting PC seats. The rising fortunes of the Liberals are forcing the NDP to invest time in trying to protect the seats the party holds while still targeting potential PC ridings. Making things even tougher for the NDP is the need to fend off the PC campaign to target some of its seat as well.

Steven Del Duca is making his case for what he calls the “progressive” votes. Thursday Del Duca said the NDP platform is “fiction.” He took his shots at the NDP plan and said it was “written on the back of an envelope.” After that attack he said he was fine if the NDP wants to go after the Liberals but he was focused on beating Ford.

Del Duca is trying to sell the idea that the Liberals are on the move.

“The momentum is coalescing around Ontario Liberals and the only way to stop Ford is to choose Liberals,” he said.

As for the Progressive Conservatives, you know they are feeling confident when Doug Ford does his daily media availability and skips his usual campaign speech. The Tory leader was back in Brampton accepting another union endorsement. Ford thanked the union and took a handful of questions.

The other leaders provide zoom links to reporters so that those not attending in person still have an opportunity to ask questions. The PCs don’t allow for that. Their live feed is via YouTube and does not facilitate remote questions.

Ford was asked about the media’s role in a political campaign. He called the media coverage “fair” and said some of the “best ideas come from the media.” The PC campaign is keeping its leader on a tight leash, turning down multiple one-on-one interview requests as the campaign enters its final week.

Ford did use his few minutes in front of the media to call the Liberal campaign “desperate” and suggest it is “falling apart.” Fending off a Liberal challenge could well be a key part of the last week of the PC campaign.

As the week goes on, look for the PC campaign to shift to its own momentum building methods. On Thursday Ford will campaign in and around Hamilton and in the evening he will be at a Hamilton rally. The PC release suggests there will be no chance for media questions.

The PC party hasn’t put out a release for Friday yet but a scroll through Twitter reveals another PC rally for Friday evening in Kitchener and again another on Sunday afternoon in London. On Thursday the Liberals will keep Del Duca campaigning in the GTA for another day. Healthcare will be on the agenda for Horwath. She will start her day in Brampton before moving west along Highway 401 to Kitchener.