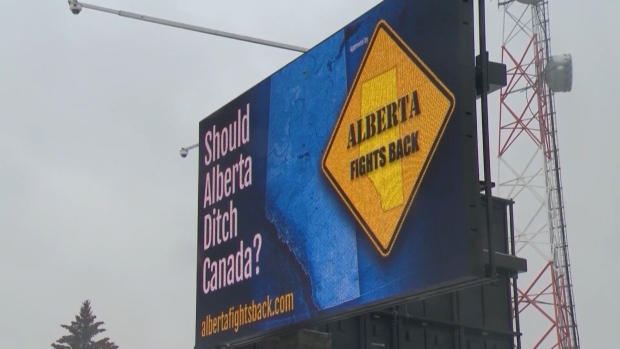 Signs seen in Alberta promoting a "western exit" from the rest of Canada.

CALGARY -- There's been a surge of support for an Alberta separatist group since the Liberals secured a minority government Monday night, and while political scientists say a split from Canada may not be a real possibility, the anger underlying the movement is serious.

"The idea of Canada has died in the hearts of many, many western Canadians," said "Wexit" Alberta founder Peter Downing, a former soldier and RCMP officer.

The Liberals managed to hang onto seats in Atlantic Canada, Quebec, Ontario and British Columbia, but Alberta and Saskatchewan ended up Conservative blue except for one NDP riding in Edmonton.

The VoteWexit Facebook page with its motto "The West Wants Out" went from 2,000 or so members on Monday to nearly 160,000 and counting by Tuesday afternoon. Downing said his group received more than $20,000 in donations and membership fees overnight.

A separate online petition calling for a western alliance and for Alberta to separate was backed by more than 40,000 people.

Downing got the idea for "Wexit" -- an apparent play on Brexit in the United Kingdom -- late last year when he heard United Conservative Leader Jason Kenney warn of rising separatist sentiment if the Liberal government didn't back off from policies he said were hostile to the energy sector. Those include the overhaul of environmental reviews and an oil tanker ban off B.C.'s north coast.

"Justin Trudeau is obviously the fuel for it, but Jason Kenney was the spark," said Downing.

He said his group is pushing for Kenney, who describes himself as a staunch federalist, to call a referendum on whether Alberta should separate. If successful, that would result in the province replacing the RCMP with its own police force and having control over immigration, taxation, firearms and pensions, Downing said.

The idea is getting interest from people in Saskatchewan, Manitoba and parts of British Columbia, too, he added.

In the meantime, Downing wants to get "Wexit" representatives elected to Parliament.

"We're going to push into Canada and cause havoc and chaos until the grounds are right and the conditions are set to have that referendum on separation and become an independent nation."

Grant Fagerheim, CEO of oil company Whitecap Resources Inc., said Alberta and Saskatchewan's contributions to the Canadian economy have not been respected and he's not surprised there has been talk of the region splitting off.

"I don't believe at this particular time, whether you live in Saskatchewan or Alberta, that people would say they're Canadian first."

Whether that amounts to anything is another matter.

David Taras, a political scientist at Calgary's Mount Royal University, said he doubts people in Alberta would back separation if they understood the practicalities. Would they need a visa to take a ski trip or wine tour in B.C., for instance?

"The vast majority of Albertans love being in Canada and have a deep emotional attachment to Canada, so I don't think that will be severed easily," he said.

"But the anger and frustration is real."

Taras said he'll be curious whether Kenney chooses an "endless war" with Trudeau over energy policy, or decides on a more conciliatory tack.

Ted Morton, a former Alberta Progressive Conservative cabinet minister, said the angst may not lead to separation, but it could propel Kenney's efforts to exert pressure on Ottawa.

The premier has already said Alberta will hold a referendum on equalization -- a federal program meant to even out fiscal disparities between "have" and "have not" provinces -- along with municipal elections next October if there's no substantive progress on building a market-opening pipeline.

Morton, now an executive fellow at the University of Calgary's School of Public Policy, has said he's heard calls to do it sooner.

He suggested increasing "Wexit" talk is a barometer of the anger and fear western Canadians feel. People in the energy sector are losing their jobs and, in many cases, that leads to domestic strife and addiction, he said.

"Pipelines aren't just an infrastructure and finance issue in Alberta and Saskatchewan," Morton said. "They're a people issue."