'He was ditched:' La Loche victim spiralled without support, now going to prison 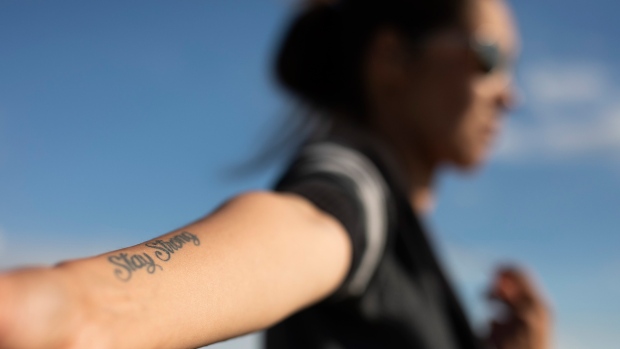 A woman who is the mother of a victim in the 2016 La Loche shooting, shows her tattoo in support of her son who was shot in the arm, in Saskatoon, Wednesday, June, 12, 2019. THE CANADIAN PRESS/Kayle Neis

SASKATOON - A promising football player whose dreams of playing professionally were crushed after a deadly school shooting in northern Saskatchewan has been sent to prison and his family says it's because he didn't get the mental-health help he needed.

They say they watched as the physical pain and the memories from the 2016 shooting in La Loche transformed the teen from a spirited athlete and outgoing student with good grades to an angry and confused young man who turned to alcohol.

At one point, he was also using methamphetamine.

The Canadian Press is not identifying the victim, now 19, because he was a youth at the time of the La Loche shooting.

The victim was 16 and from Saskatoon, but was spending part of the school year with his grandparents in La Loche, a remote Dene community 700 kilometres to the north, when he was shot at the entrance of the high school.

In the panicked minutes that followed, a 17-year-old student with a shotgun wounded six others and killed a teacher and a teacher's aide. He had earlier killed two teenage brothers in a nearby home.

The shooter pleaded guilty to charges that included first-degree murder and was sentenced last year as an adult to life in prison with no chance of parole for 10 years. Because he is appealing his sentence, he can't be named.

The gun blasts struck the young football player in the chest and arm, where he suffered permanent nerve damage. He couldn't grip a football anymore, said his mother.

“When it could have been anything else in the body, it was his hand,” she said.

He underwent multiple surgeries and tried weightlifting and playing basketball, but grew frustrated and lost his passion for sports, said his grandfather.

His mother packed away her boy's stacks of Sports Illustrated magazines, collection of footballs and other gear. He told her he didn't care what she did with it.

Sitting at a Tim Hortons, the mother swiped through pictures of her eldest son on her cellphone.

Images of a past Christmas he spent with his two younger brothers. A photo of him when he was about 12, flashing a big smile at a flag football game.

Another photo of him, taller and bigger, dressed in a black-and-yellow jersey on the sidelines of a high school football game. It was taken shortly before he left for La Loche.

Growing up his favourite football player, said his grandfather, was former Saskatchewan Roughrider Weston Dressler. Scouts had told the family there was a chance the youth could play professionally.

But that never happened.

Last week, he was sentenced after earlier pleading guilty to several offences, including assault with a weapon and possession of an unloaded prohibited firearm with ammunition.

The young man admitted to using bear spray on his ex-girlfriend and her new boyfriend during a confrontation in 2018. A few months later, police discovered him inside a vehicle with a sawed-off rifle and rounds of ammunition. Court heard he told friends he wanted to commit a robbery.

He was sentenced to three years in prison.

Court heard he was a La Loche shooting victim and didn't get the proper counselling he needed to recover.

The grandfather said he had asked the provincial government for an advocate to help the family co-ordinate counselling services while the young man recovered in Saskatoon. But that didn't happen.

Most of the help went to La Loche, he said.

“It was all about La Loche, La Loche, not really the victims,” the mother added.

Counsellors were sent to the village after the shooting, but a year later community leaders complained about a lack of continued support.

Earlier this year, after the third anniversary of the shooting, Prime Minister Justin Trudeau visited La Loche and announced $2.2 million in funding for projects and mental-health services for students.

Prosecutor Kristin MacLean said in the recent case involving the shooting victim, the court considered the trauma he suffered. The Crown feels the prison term is appropriate given factors such as the risk to public safety and prevalence of firearm-related crimes in Saskatoon.

“The mental-health impacts from the PTSD alone, I think, also influences his behaviour,” said Marchand.

He had requested provincial jail time and probation so his client could get more help with his addictions and to deal with the shooting.

Marchand said his client didn't get the counselling he needed to help him recover and believes prison will do nothing more to help.

“Without some form of intervention ... in some ways his presence in front of the courts at some point in the future was almost an inevitability.”