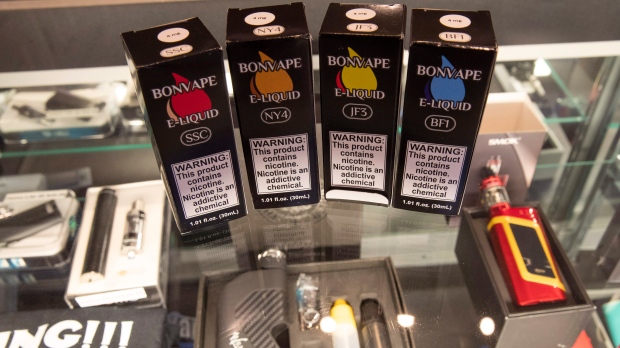 Flavored vaping liquids and devices are on display at the VapeNY.com store, Thursday, Jan. 2, 2020, in New York. (AP Photo/Mary Altaffer)

The federal government says it wants to ban most flavoured vaping products in a bid to reduce their appeal to youth.

The department said in a news release that the proposed changes would make vaping less enticing to youth, while still providing options for smokers looking to switch to an alternative source of nicotine.

“Vaping is putting a new generation of Canadians at risk of nicotine addiction,” Health Minister Patty Hadju said in a statement. “These new measures build on our efforts to stop young Canadians from vaping.”

The proposed rules would also limit promotion to products with tobacco, mint or menthol flavours.

This would build on existing regulations that prohibit the promotion of dessert, cannabis, confectionery, energy drink and soft drink flavours.

But according to regulators, other youth-friendly flavours have been identified on the Canadian market, including branding related to fruit, spices, nuts, alcoholic beverages and otherwise suggestive names such as “honeymoon” or “brain freeze.”

The federal proposal would also curtail the use of most flavouring ingredients, including all sugars and sweeteners, in vaping products.

It would also set standards that would limit the tastes and smells that vaping manufacturers can evoke.

Nova Scotia, New Brunswick, Prince Edward Island are among the jurisdictions that have banned vaping flavours other than tobacco, while Ontario and British Columbia have limited the sale of flavoured e-cigarettes to age-restricted specialty stores.

The Canadian Cancer Society welcomed Ottawa's proposed flavour restrictions as a step in the right direction. But the group called for the draft regulations to be amended during the 75-day consultation period, which launched Friday, to add mint and menthol to the list of banned flavours, citing their appeal to youth.

Meanwhile, the Vaping Industry Trade Association railed against the proposal, arguing that flavour restrictions will prevent smokers from making the transition to e-cigarettes while doing little to curb youth vaping.

Also on Friday, the federal government finalized regulations that lower the maximum nicotine concentration for vaping products sold in Canada to 20 mg/ml from 66 mg/ml.

The nicotine cap will take effect for e-cigarette manufacturers on July 8, and retailers will have to pull products that exceed the limit after July 23.

A Statistics Canada report released in March suggests that about one in seven young Canadians reported vaping in the previous month in 2019.