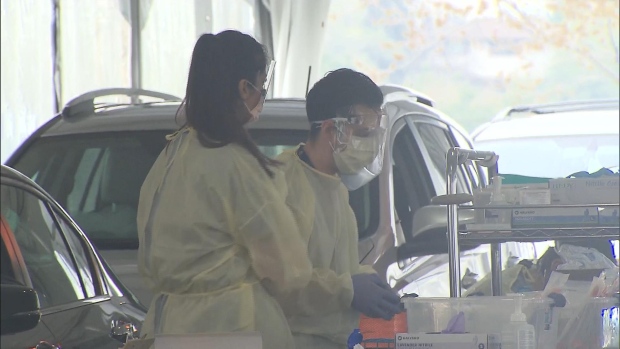 Interviews with nurses, personal support workers and others in hospitals and long-term care homes suggest chronic stress and burnout are common, but fear of reprisals is stopping them from speaking out.

“The knowledge that they are at increased risk of infection due to lack of protection has resulted in anger, frustration, fear, and a sense of violation that may have long-lasting implications,” the paper states.

The study, in New Solutions: A Journal of Environmental and Occupational Health Policy, was done by James Brophy and Margaret Keith, academic researchers affiliated with the University of Windsor and noted occupational hygienists.

Health-care workers in Canada have contracted the novel coronavirus in far higher numbers relative to the general public, comprising almost one-in-five confirmed cases, according to a previous study. To date, COVID-19 has sickened close to 9,000 front-line health-care workers and killed 16.

Only 10 workers - nurses, personal support workers and other staff - agreed to be interviewed for the qualitative study. Others refused to take part for fear of being disciplined or fired, they said.

Despite the handful of interview subjects, the authors said their peer-reviewed findings reflect other larger-scale research and surveys, and its findings are valid.

Those interviewed said they still lack personal protective equipment despite the very real risks of contracting COVID or spreading it - risks apparent from the early days of the pandemic. Some said they were warned by supervisors not to wear N95 protection, even if they had their own, Keith said.

Others spoke of the constant grief and trauma they endure when patients or residents die, a situation only getting worse as new cases soar.

“Words on the page cannot convey the level of emotion we heard in the voices of the health-care workers we interviewed,” Brophy said. “We did not expect to hear the degree of anger and desperation that came out.”

The vast majority of the front-line health-care workers are women, many racialized, Keith said. Many are part-time and vulnerable to job loss.

“Health-care workers are desperately in need of protection from COVID and from their often back-breaking and soul-crushing working conditions,” Keith said. “But the authoritarian and hierarchical nature of health-care work contributes to (their) risks and adverse mental-health impacts.”

Despite the issues, the workers said the provincial government had let them down by failing to take action to deal with their health or labour concerns. Chronic understaffing and failing to keep them safe, the authors said, means the workers can't do their jobs effectively, putting everyone at risk.

“Health-care workers health and well-being are being sacrificed,” Keith said. “We all need to pay attention to their pleas.”

There was no immediate response to the qualitative study from the provincial government, but Health Minister Christine Elliott praised the “tireless efforts” of front-line health-care workers during an announcement on Tuesday about the roll-out of rapid tests.

Michael Hurley, president of the Ontario Council of Hospital Unions, said front-line staff in close contact with COVID-infected people still have no ready access to proper respirators. The Ministry of Labour has also rejected all 253 work refusals as valid.

“This explains why people feel sacrificed and why they feel exploited and violated,” Hurley said.

This report by The Canadian Press was first published Nov. 24, 2020