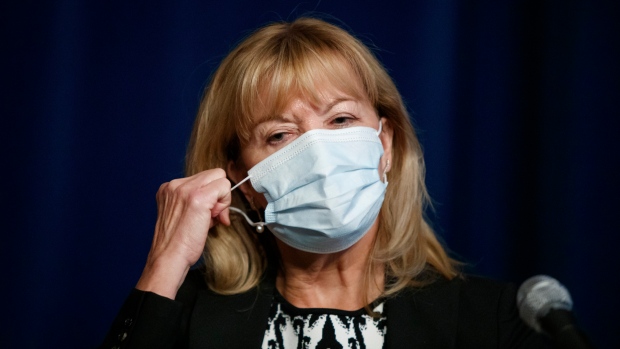 Ontario Minister of Health Christine Elliott removes her mask to speak at a press conference at Queen's Park in Toronto, Wednesday, Sept. 22, 2021. THE CANADIAN PRESS/Cole Burston

Ontario’s health minister says that the Ford government isn’t ruling out making it mandatory for health-care workers to be vaccinated against COVID-19 but opposition leaders say that the province needs to act now before things get worse in the sector.

Christine Elliott made the comment during Question Period at Queen’s Park on Thursday morning as she rejected criticism from opposition MPPs over her government’s decision to mandate vaccines for long-term care workers while allowing unvaccinated health-care workers to remain in their jobs so long as they participate in a regular testing program.

“The reality is that the people in our long-term care homes are the most vulnerable, they are the ones where we have seen breakouts happen and that is why the minister of long-term care has created a mandatory vaccine policy to make sure those people are safe,” she said. “But rest assured should we see a similar situation unfolding, and we're watching this very carefully on a daily basis, we won't hesitate to introduce it elsewhere.”

The Ontario government only requires that unvaccinated health-care workers participate in an educational course and regularly test negative for COVID-19.

However, Chief Medical Officer of Health Dr. Kieran Moore has said that about 40 per cent of hospitals have introduced more stringent policies making vaccination mandatory for all employees.

During a media briefing on Thursday afternoon, Moore said that vaccination rates in the acute sector are in the “mid to high 80s” and “seem to be increasing by the day.”

But Moore conceded that he is “saddened” by the number of healthcare workers that remain unvaccinated.

Moore did not say on Thursday whether the province should mandate vaccination for workers at all acute care facilities, though he did say that a “small percentage” of workers at hospitals with more stringent policies will be losing their jobs and that officials will be monitoring the situation closely for “unintended consequences.”

His comments come as the the Windsor Regional Hospital announces that it has terminated 57 workers who didn't comply with a Thursday deadline to be fully vaccinated. The hospital did say that 98.5 per cent of its workers were compliant with the policy.

Speaking with reporters at Queen’s Park earlier in the day, NDP Leader Andrea Horwath said that it is “troubling” that the government hasn’t already made vaccines mandatory for all healthcare and education workers but not altogether surprising.

“It’s kind of the way that this government has handled the COVID-19 crisis all the way along. They've never shown urgency, they've never gotten ahead of things, they're always on their back foot and that has meant that people have suffered and COVID-19 has spread,” she said. “It is shocking that here we are on the seventh of October and we still don't have mandated vaccines in healthcare and in education, and there's no reason for that.”

The Ontario Medical Association has been calling for a mandatory vaccination policy for all healthcare workers since July but the Ford government has so far not made any commitment to doing so across the board.

On Thursday Liberal MPP John Fraser said that the Ford government needs to show “leadership” on the issue but so far has only exhibited “latency.”

“I think the premier believes there's some political risk in doing this and is trying to force every organization to come up with their own policy. That's not leadership,” he said. “Government has to say these are the rules folks and if you're caring for someone in long-term care or a hospital or going into their home to care for them or you're teaching a child or caring for a child at a childcare centre you need to be vaccinated. Parents need to know that, families need to know that and the answer that we got today was latency.”

Long-Term Care Minister Rod Phillips has previously cited the low vaccination rates in some homes as being a key driver in his decision to make vaccination mandatory.

As of last week more than 90 per cent of long-term care staff were vaccinated but in 18 homes the vaccination rate was lower than 70 per cent.

The province has not released information about the vaccination rates at individual healthcare facilities, as it has done for the long-term care sector.