Heat wave may be responsible for 3 deaths in Ontario: coroner 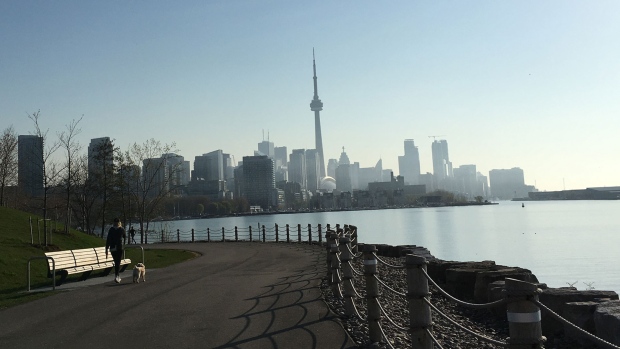 The Toronto skyline is seen from the waterfront near Ontario Place on a sunny morning. (Joshua Freeman /CP24)

Ontario's chief coroner says heat may have caused three deaths in the province over the last week or so, while visits to emergency rooms due to heat spiked.

Dr. Dirk Huyer said Tuesday that the three deaths were reported over the last four days.

In Quebec, health authorities have said that up to 70 people died may have died, largely from the heat aggravating their existing chronic health issues.

Ontario’s numbers are vastly lower becausethey conduct autopsies and other investigations before declaring that a death is heat-related.

Huyer said Ontario also classifies deaths as heat-related only if heat was the main factor in precipitating death.

“In Ontario we specifically look and investigate deaths where we think heat was the primary factor,” Huyer said.

The heatwave that started June 29 saw temperatures hit more than 30 C, with humidex values making it feel like 40 C or more in some places.

Toronto and the surrounding area declared five straight days of extended heat warnings, with a total of seven days where temperatures broke the 30 C mark.

Ontario’s chief medical officer, Dr. David Williams said that after the first day of the heat wave, emergency room visits attributed to environmental factors such as heat rose by seven times the daily average for this point in the year.

“And not just in one centre, but in most of southern Ontario,” Williams said of the spike in visits. “A heat event isn’t just about one city, it’s throughout the province and everyone is affectedthe same.”

He said that preventing deaths centres on monitoring vulnerable populations, such as young children, those with chronic health issues, the homeless and the elderly.

But it also requires convincing those who are usually outside for long periods of time, either for work or leisure, to scale back, Williams said.

“Some of the people who suffer consequences of heat are still trying to do very unthoughtful activities like trying to run a marathon in very high temperatures.”