Toronto recorded the highest average asking rent in the Greater Toronto Area last month, marking a nearly 25 per cent year-over-year increase in rental prices for all property types in the city, according to a new report.

“The average rent in the GTA in July of $2,482 per month has now topped the previous market-high recorded in November 2019 of $2,460,” Ben Myers, president of Bullpen Research & Consulting said in a statement accompanying the report on Wednesday. “With further interest rate hikes coming, uncertainty in the ownership market, and the high-demand fall rental season upcoming, expect further outsized rent increases over the next few months.” 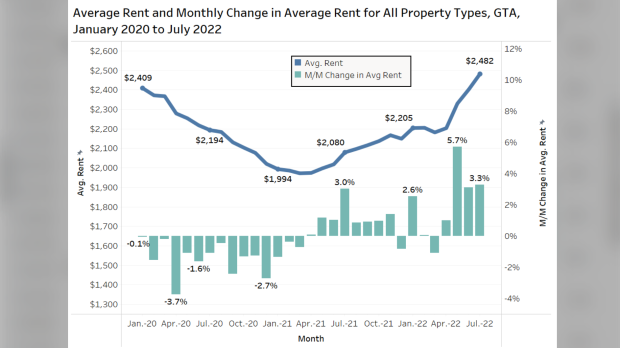 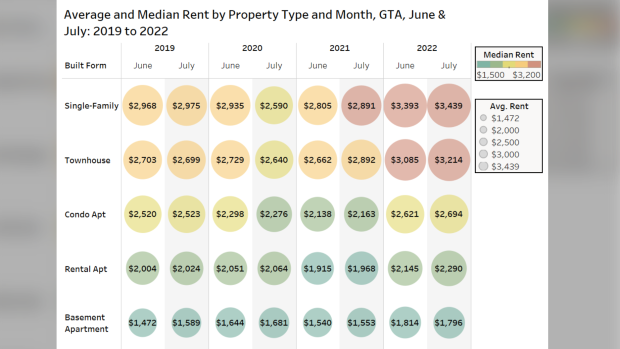 Meanwhile, four out of the five bedroom types included in the report saw double-digit percentage increases in rent when compared to last July.

Two-bedroom rents cost an average of $2,708 in the GTA last month (a 19 per cent year-over-year increase), and four-bedroom rents saw a modest three per cent annual rise at $3,542 in July.

After Toronto, the second most expensive rental market was reported in Mississauga at an average of $2,308 in July, up from $1,982 in July 2021.

Among all the GTA municipalities included in the report, Vaughan, which had the third highest rent last month at $2,292, saw the lowest annual rent growth at 2.8 per cent in July. 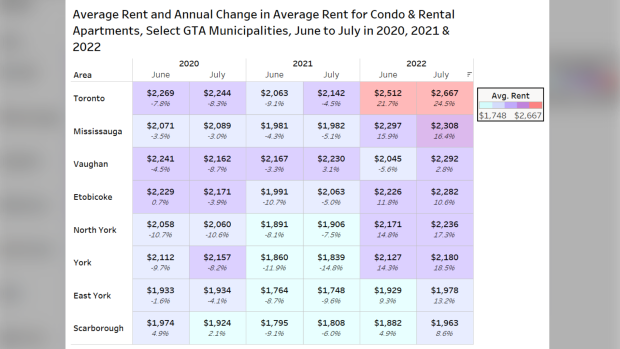 The report says average rent in all Toronto postal codes were up year-over-year in July, but The Beach and the Upper Beaches (postal code M4E) saw the largest annual rise in rent (52 per cent) at $2,756 last month.

Postal code M5V, which includes the Entertainment District, King West and Cityplace, saw the second largest annual increase in rent (43 per cent) to $3,203.

Toronto’s Casa Loma neighbourhood recorded the highest average rent per square-foot for condo and rental apartments at $4.40 in July, up from $3.07 last July.

TorontoRentals.com and Bullpen Consulting say they expect rents to continue rising as “the fall market is the strongest for demand” during a typical year.

A for rent sign outside a home in Toronto on Tuesday July 12, 2022. THE CANADIAN PRESS/Cole Burston